I know it’s a bit sacrilegious, but I find it hard to get very excited about ruins. Muang Khoun in Eastern Laos, which used to be Xieng Khuang, was famous in the 16th century  for its magnificent stupas whose sides were covered in treasures, but years of Thai and Vietnamese invasions, pillaging by Chinese bandits in the 19th century, and ridiculously heavy and relentless bombing in the second Indochina war have left next to nothing to show of the former capital’s glory.

That Dam Stupa (yes that really is its name!)

Treasure seekers have tunnelled right through the base of the stupa over the years – don’t know if they found much.

Theng, my driver, had brought me to see the ruins of the 16th century Wat Phia of which only a few tall brick columns around a large seated Buddha remained. I’m sure it was wonderful in its day, but my brain was struggling to make much of a significant connection between what I was seeing in front of me and what had been before, not helped by the complete lack of information available as this was away from the usual tourist stomping ground. You get a bit blasé about temples and Buddha statues in S.E.Asia as you come across so many of them.

The remains of Wat Phia and its rather sorry looking Buddha

So as not to offend Theng, I mooched around for a bit, and seeing that he’d found a pretty young lady to flirt with, (hmm – so is that why we came here . . .?) I wandered off and poked my nose into the doorway of a building round the back of the Wat.

Sitting inside was an elderly monk smoking a pipe. Being more interested in living beings than statues, I asked if I could go inside. He was very smiley and welcoming, and it turned out that he, like many of the older Lao people, spoke French, as Laos had not long before been a French colony, so we could converse. I found out that his name was Chan Doundy Varmarong, and he was 84 years old, and he’d been at the temple many many years, living a simple monastic life. He seemed glad of the company, and we chatted about all sorts, from the war to his views on life and Buddhism.

I took some photos and he seemed to enjoy looking at them on the back of the camera.

After a while I thought I’d better go and rescue Theng’s conquest, and started to say my ‘goodbyes’, but he told me to hang on a moment while he searched through some of his papers. 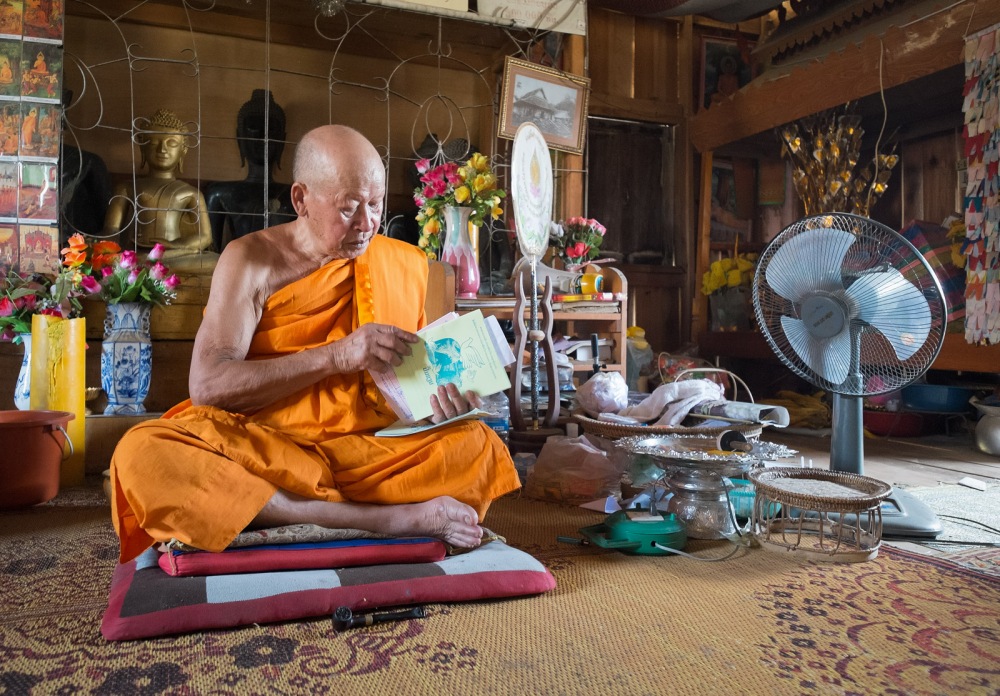 He found what he’d been looking for and showed me the name and address of a French lady written in one of the exercise books. “Another lady came to visit me once”, he said, “perhaps you know her?” I had to disappoint and tell him that funnily enough, no, I hadn’t come across her before, but it made me realise how different his perception of the world must be from where he was sitting, and what different lives we are all leading, and as I wandered back to find Theng, I reflected on the privilege of the travel experience that can momentarily and unexpectedly bring such unlikely paths to cross. 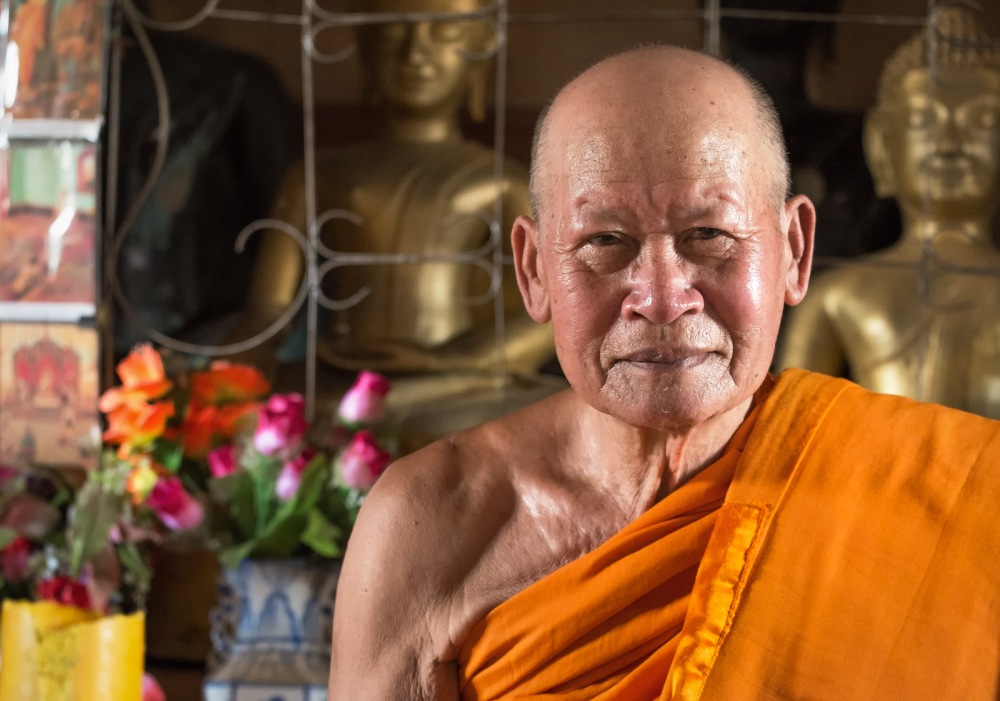 Walking back past the Buddha again, he seemed to have acquired a calm dignity sitting there with his war damage, in the midst of the ruins, and I saw this time that he had a smile on his face, just like my monk who had also lived here through those terrible times, and was still calmly smiling and celebrating life. A humbling triumph of the human spirit, and a theme which was to touch me many times as I continued my travels through this devastated country.