They make it look zo easy! 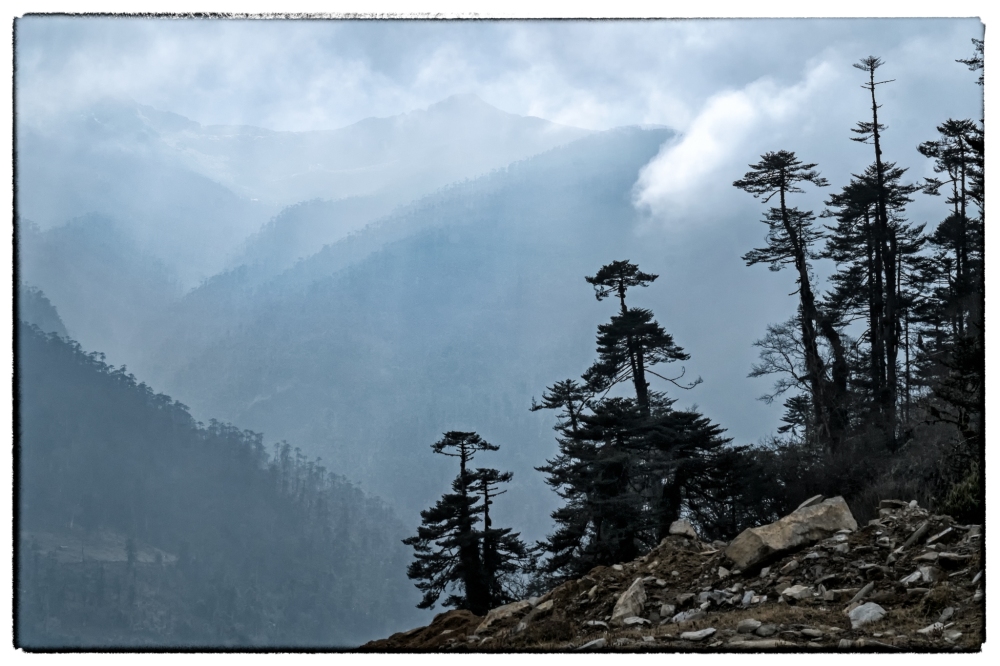 It was starting to feel pretty eerie as we rounded hairpin after hairpin climbing the dirt road up the mountainside in the remote East of Bhutan. We’d passed the last village some time ago and signs of habitation had been replaced by skeletal hemlock trees with ‘old man’s beard’ moss hanging from their branches, shrouded in mist. 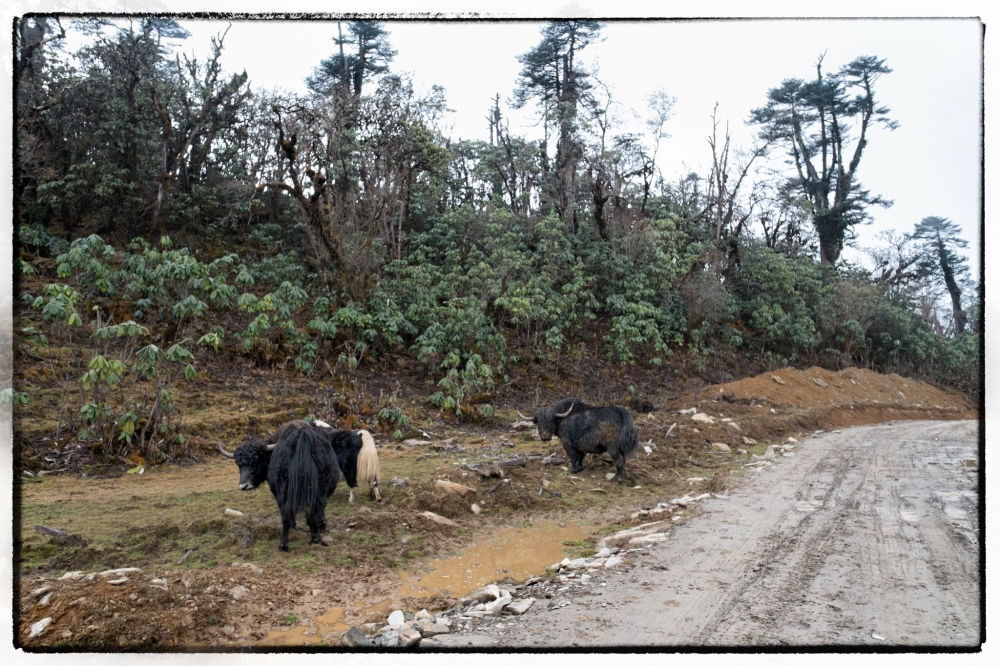 Out of the gloom appeared a handful of ‘zo’s, a sort of yak-cow hybrid which I’d only come across before on a Scrabble board (very handy when you’ve got the ‘z’). We stared at each other briefly with equal measures of curiosity and as we’d slowed down to get a better look at them, I spotted a little wooden dwelling set back from the road. There was smoke coming from the chimney so we pulled over and went over to say hello. 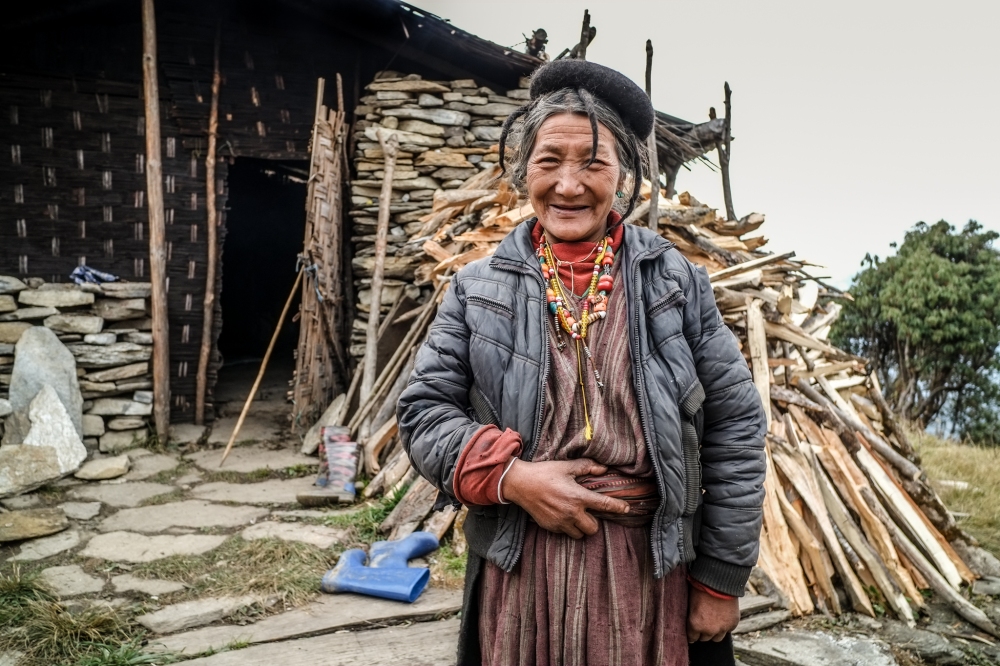 We were warmly greeted by a rugged lady wearing a  black felt hat with tails dangling down it, turquoise and coral jewellery, and faded clothing, that seemed to blend perfectly with her surroundings. Outside her house, which I could now see was partly covered in dry stone walling, was a large stack of firewood. 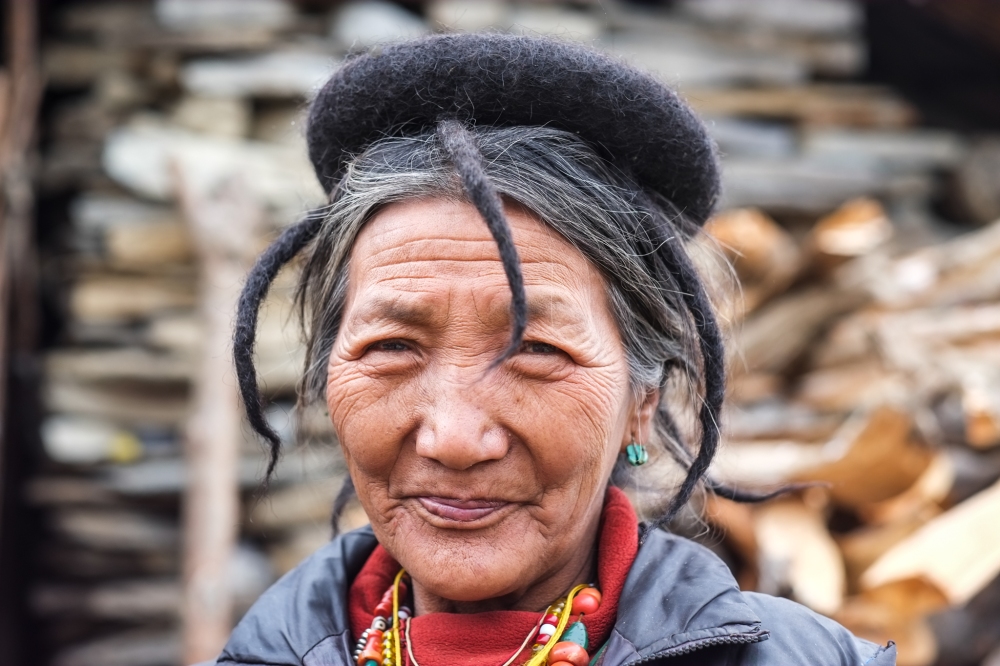 Langa Dema, as her name turned out to be, was from the Brokpa tribe, semi-nomads whole live in the high reaches of Eastern Bhutan, and the hat she was wearing was the traditional yak hair hat with the five tail-like spouts which drain the water away and keep them dry when it rains. 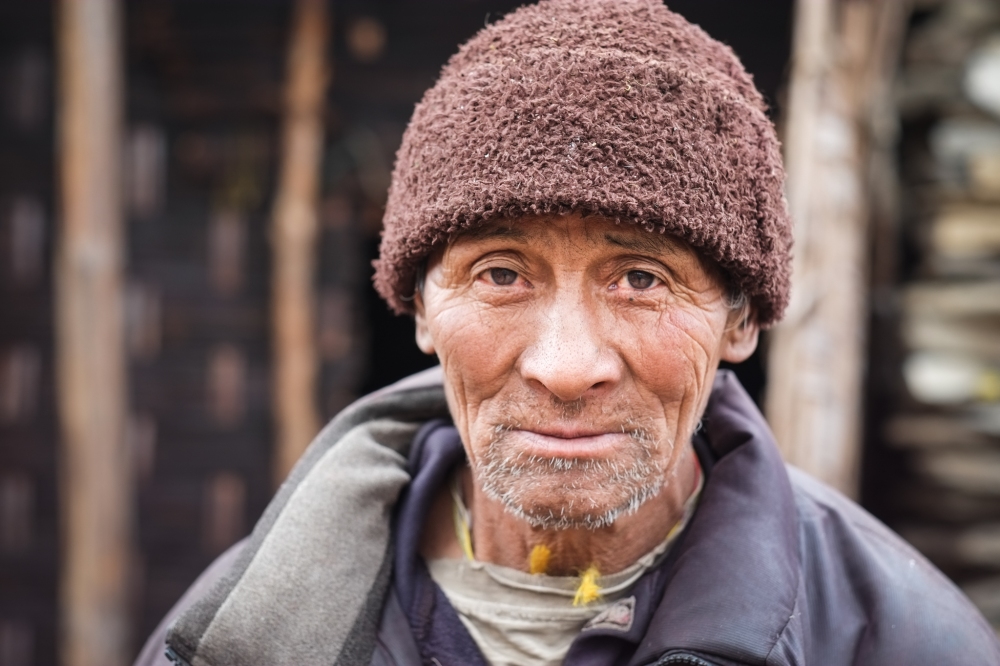 She called out to her husband, Nidup, to come and meet us. 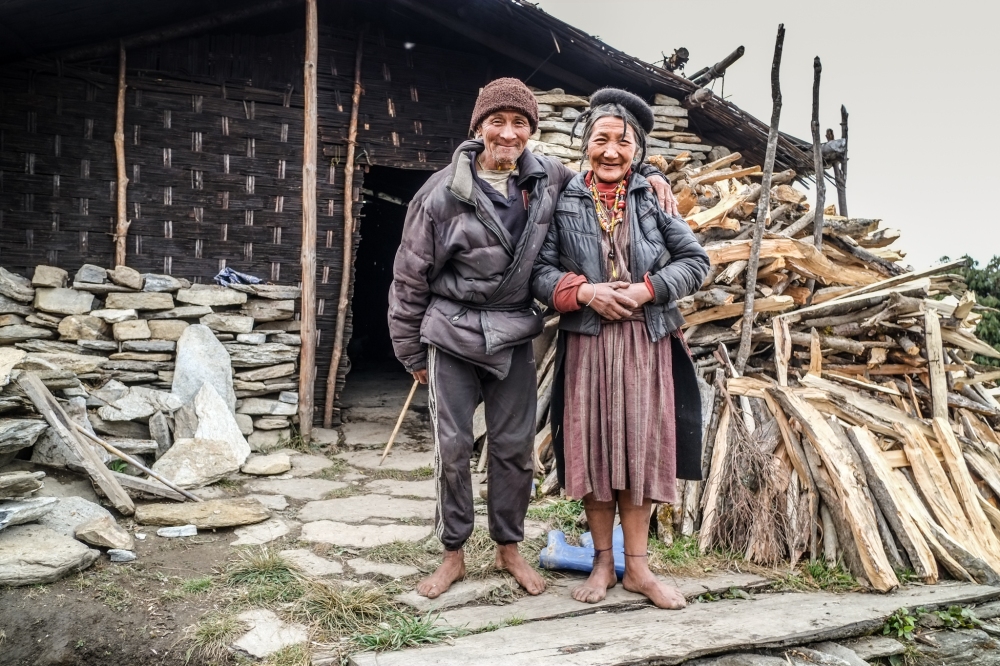 They were such a lovely couple, married for more than 40 years (they weren’t sure exactly how long), smiling as they told us they couldn’t ever remember having had an argument during all those years. I felt a bit feeble wrapped up in my thermals and down jacket as they stood there in their bare feet and was delighted when they asked us in to have some tea round the fire but alas my driver rightly persuaded me that we hadn’t got time so reluctantly, we had to politely decline. 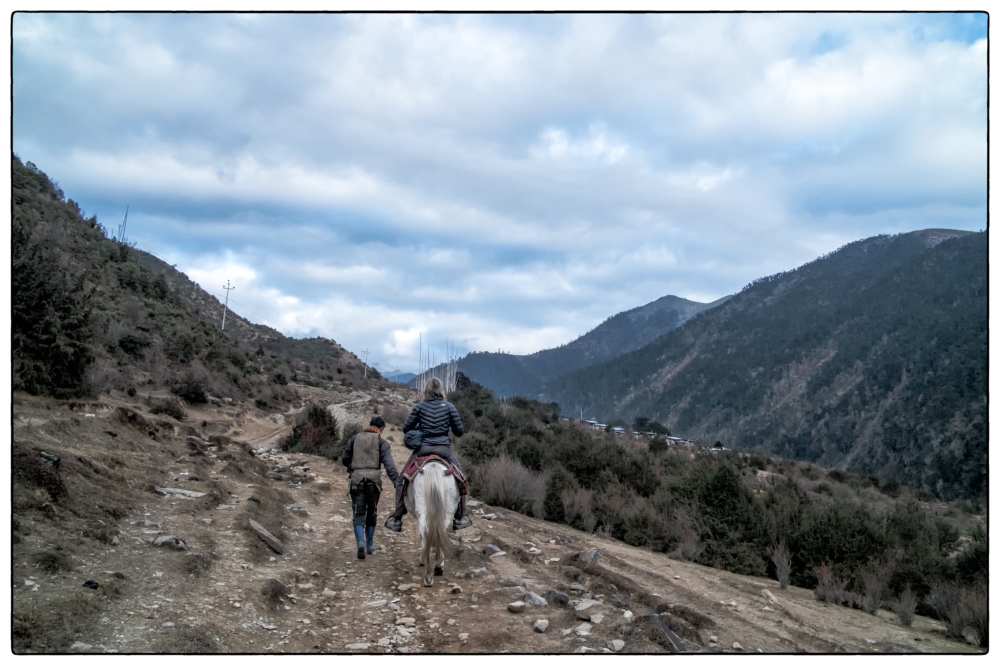 It’s just as well we did crack on, as after a while the road ran out and we still had a long way to go on our journey, continuing on foot and horseback   in search of the Brokpa settlements I was so keen to reach.

Several days later, after a wonderful experience, it was time to return, and arriving once more at the road head we were met with the scene of some locals trying to get their jeep to start. The Brokpa men take the long journey to the valley floor from time to time to sell their yak meat and cheese, but the transport can be temperamental in the harsh conditions. 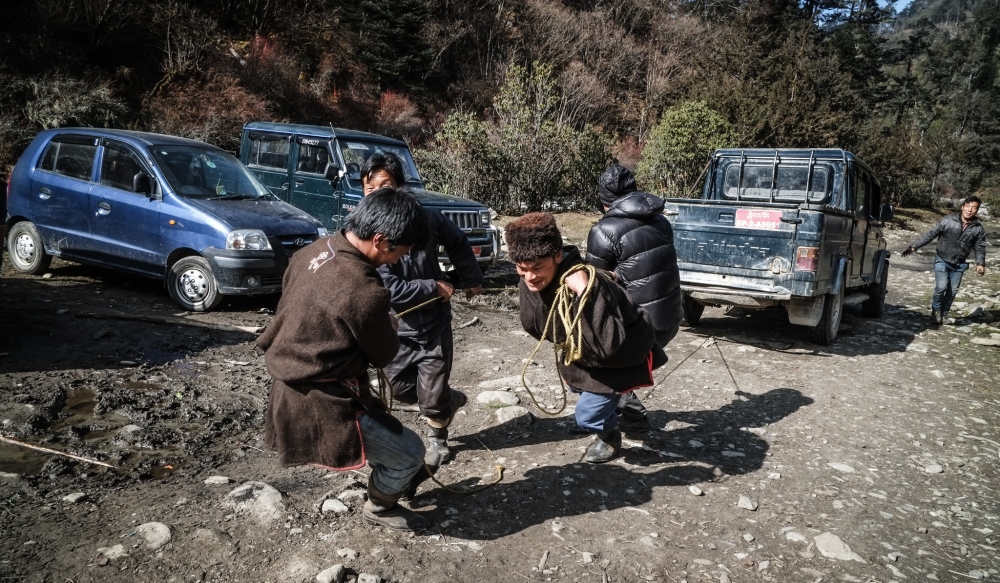 Whilst they were persuading the jeep to start, I entertained myself meeting and photographing a mum and her baby and little girl who were also waiting at the road head. 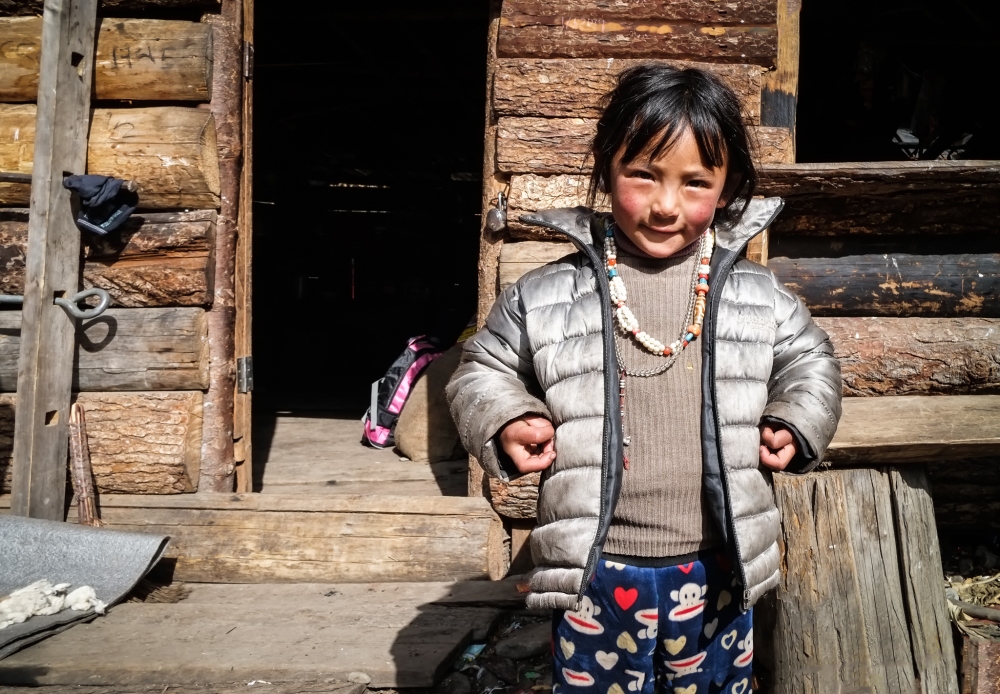 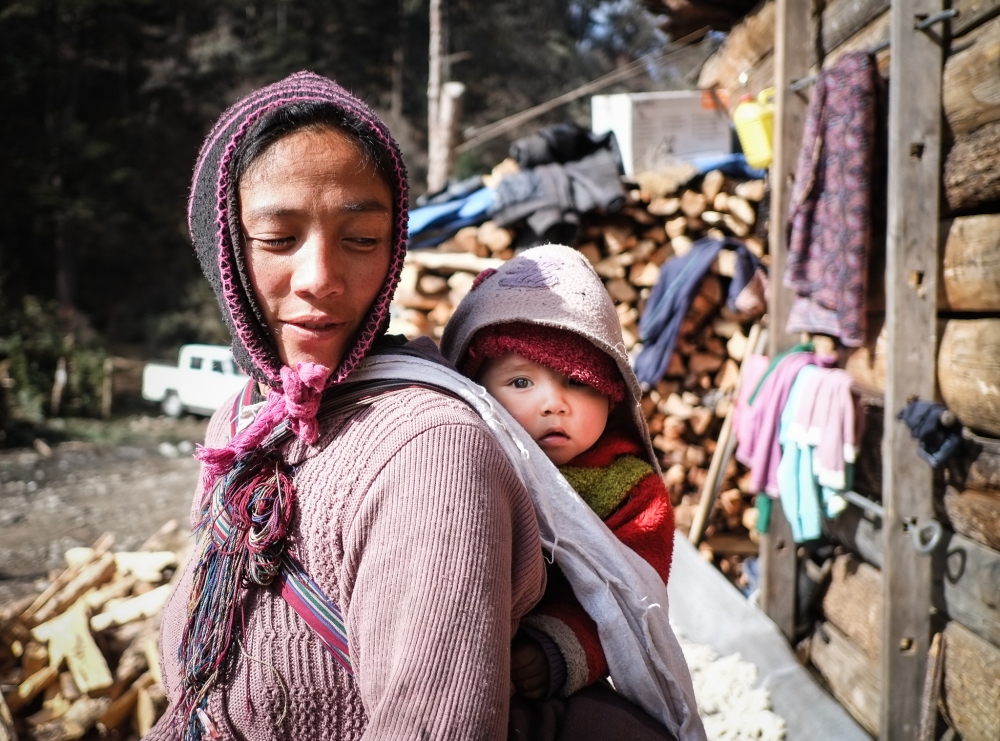 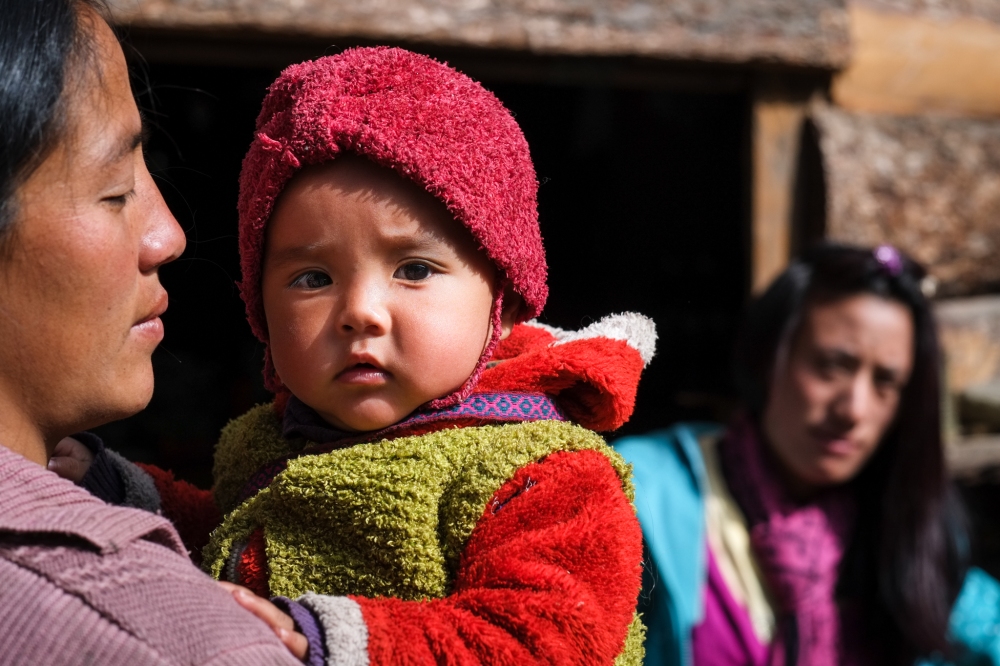 The pretty little girl was 5 year old Sonam Yangdon, and I made a couple of Polaroid portraits for her to keep which she was delighted with. 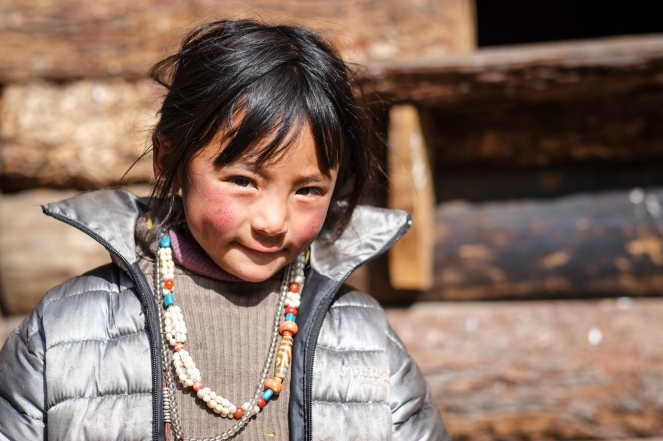 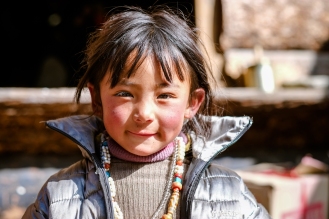 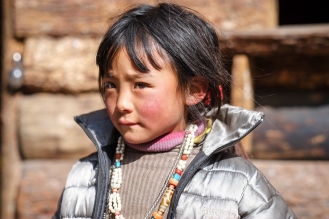 Eventually the jeep spluttered into life and we could start our return journey down the mountain, giving a lift to the mother and her children. The public transport system in Bhutan seems to consist of giving a lift to whoever’s going in your general direction – genius in its simplicity and great for meeting locals on your travels! I’d assumed they were coming down to the town with us but after a while of bumping along with Sonam Yangdon clutching her Polaroids tightly in her grubby fist, we saw the zos again on the roadside and the jeep pulled up. 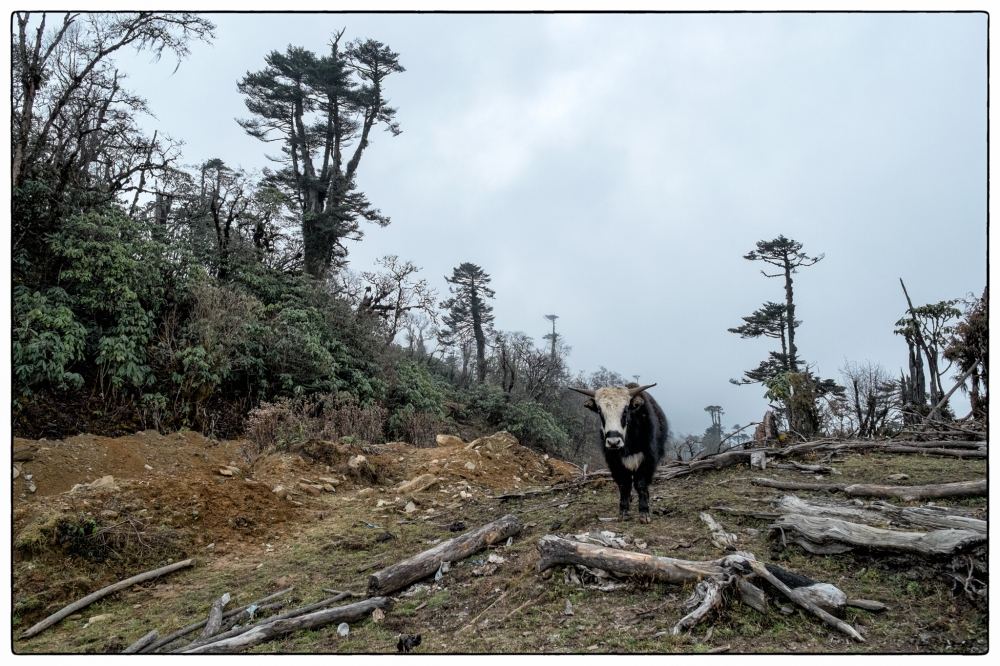 To my surprise everyone got out and walked over to the little house where we’d broken our journey a few days before.

The family from the road head were going to stay with their parents – none other than Langa Dema and Nidup from our earlier encounter! 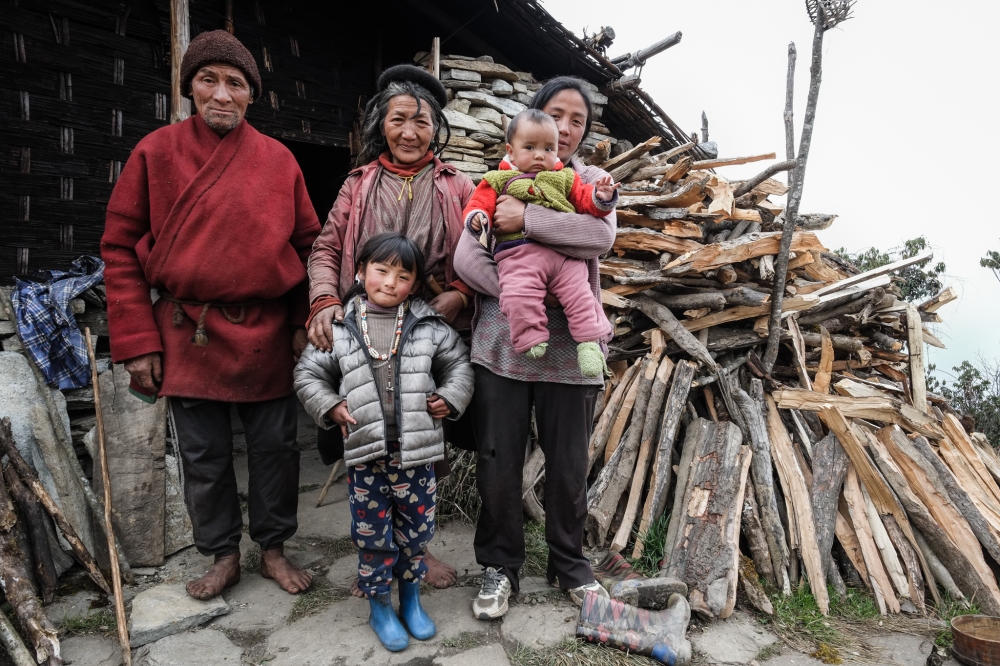 We were warmly welcomed round the fire (I felt slightly less feeble this time as Nidup had his traditional thick red wool Brokpa jacket on) and I heard all about their amazing lives. 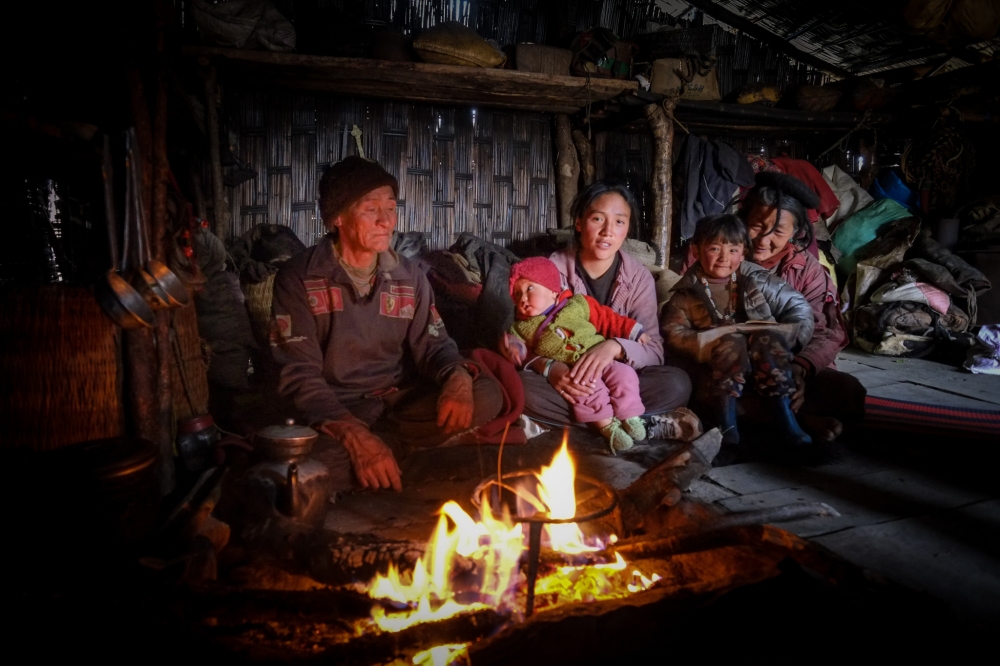 As semi nomads, the family live for 6 months of the year in this, their winter home, tending their zo herd, and the rest of the year they move them higher up the mountain. They’ve raised five children in this tiny one -room isolated house, two sons, who are yak-herders, and their daughter, the one we’d met, who lived in a Brokpa settlement higher up the mountainside, and two more sons who had become monks from an early age. It’s not uncommon for some of the children to become novice monks, both to ‘earn merit’ in the Buddhist belief system and also to ease the difficulty of bringing up a sizeable family with restricted resources. It also gives the children a chance of education. None of the family’s other children had had any schooling at all. 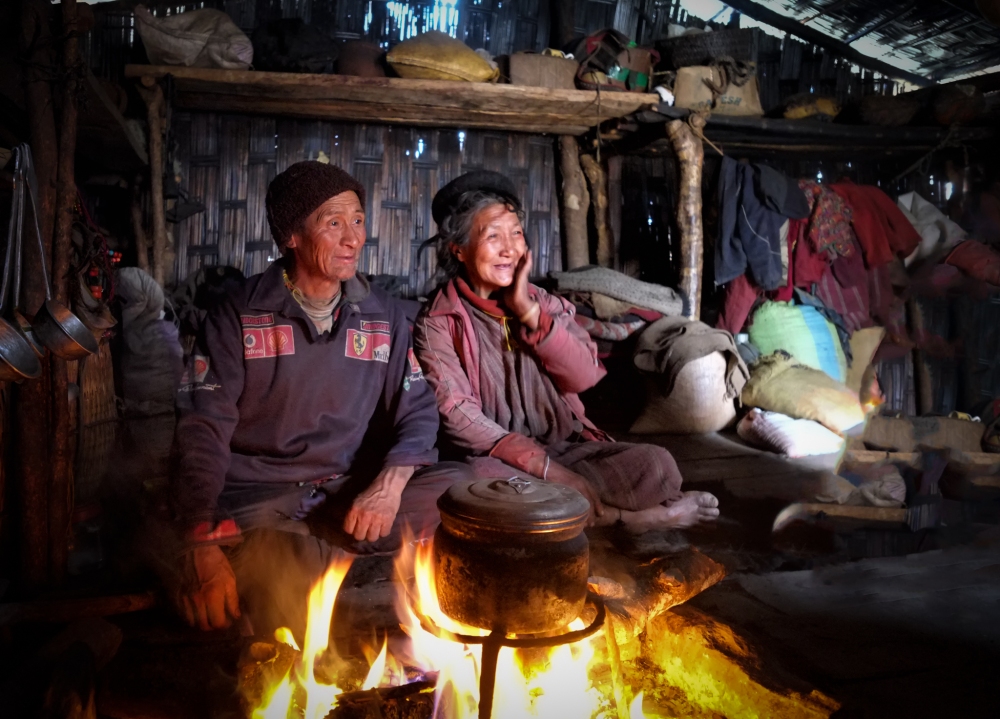 The cold winds rattled through the gaps in the walls but the fire and the stories kept us warm. They were such a lovely family, and Langa Dema was clearly delighted to see her grandchildren again. 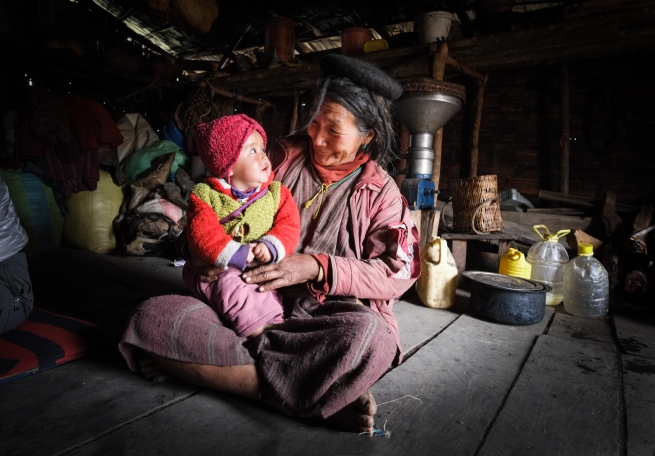 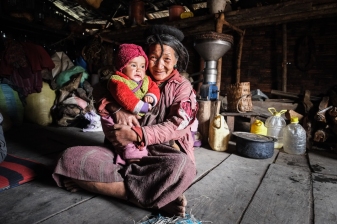 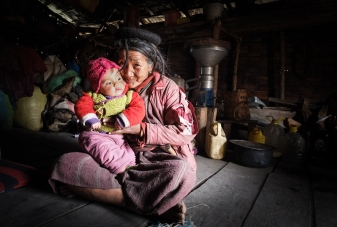 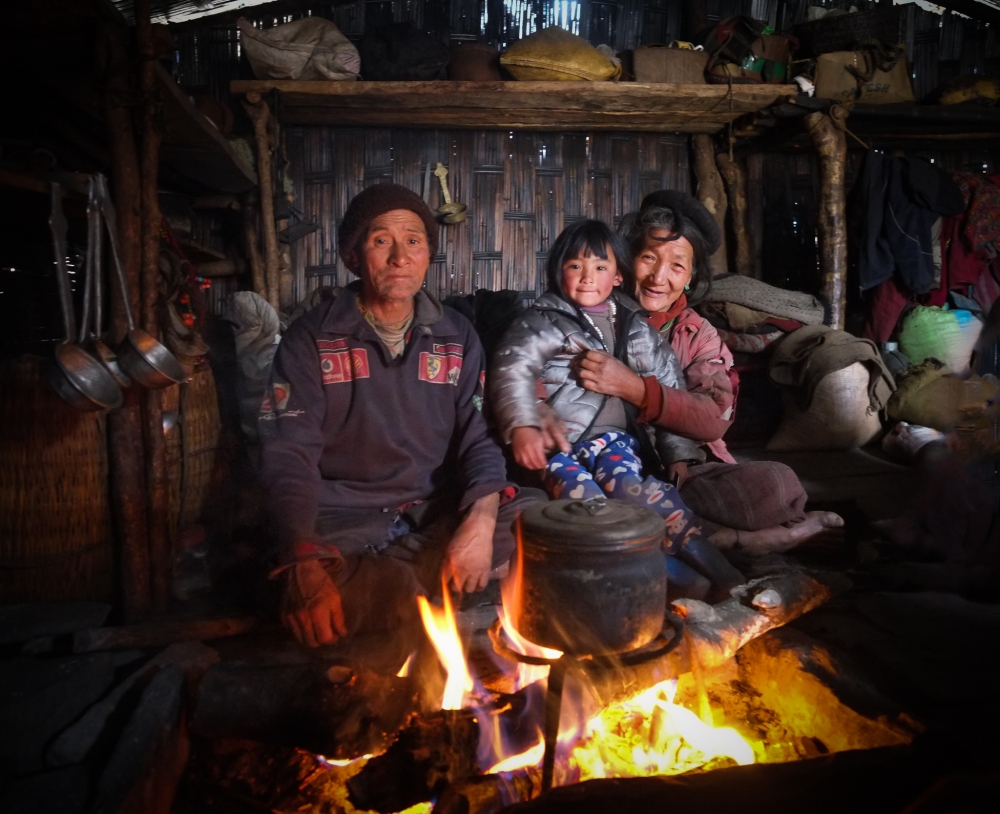 Throughout my few days with the Brokpa I had been struck by their ability to be at the same time tough and rugged, coping with their harsh living conditions and demanding lifestyle, yet gentle and warm in their relationships with each other and with their children.

Sonam Yangdon drew me a picture in my travel notebook and it was time to move on and leave this family to themselves. 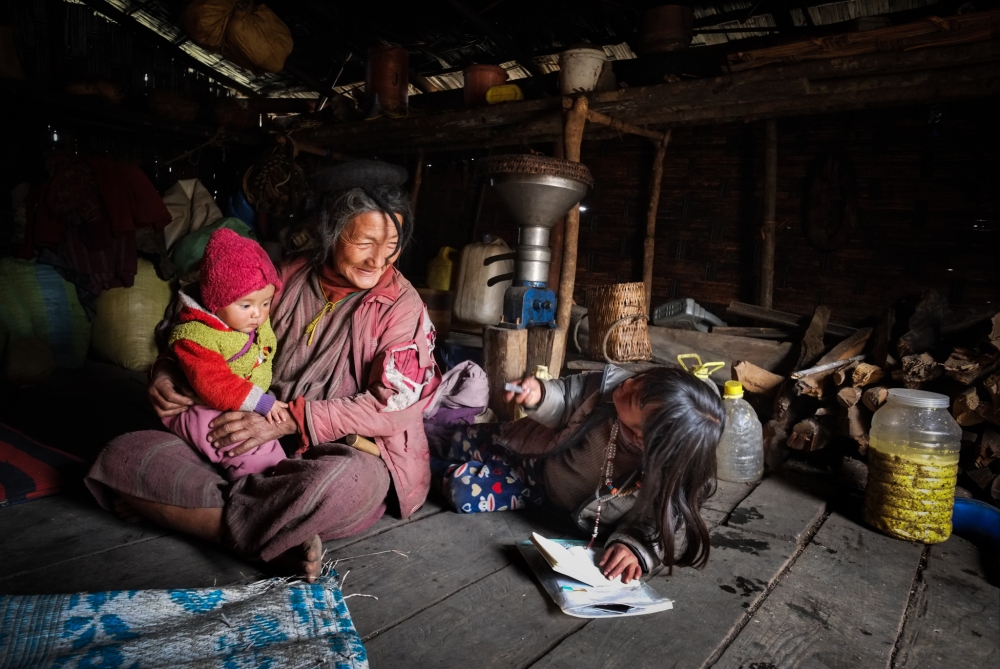 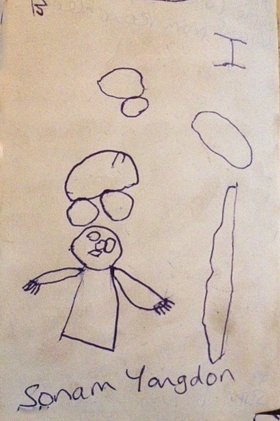 Maybe I’d been in Bhutan too long, and heard too much talk of destiny and karma, but I couldn’t help thinking it was meant to be that giving a lift to the road head family should take us back to the couple we’d met on our way up the mountain. I shall always have a treasured memory of this humble welcoming family who were so happy living with so little by Western standards, who had carved out a life of contentment for themselves through the strength of their relationships in this tiny house up the  mountain. A point of reference which I will be able to remind myself of for years and years to come, and from now on I’ll have a little glow inside every time a make a ‘zo’ in Scrabble as I recall the image of  Langa Dema’s warm contented smile and all that it symbolises. 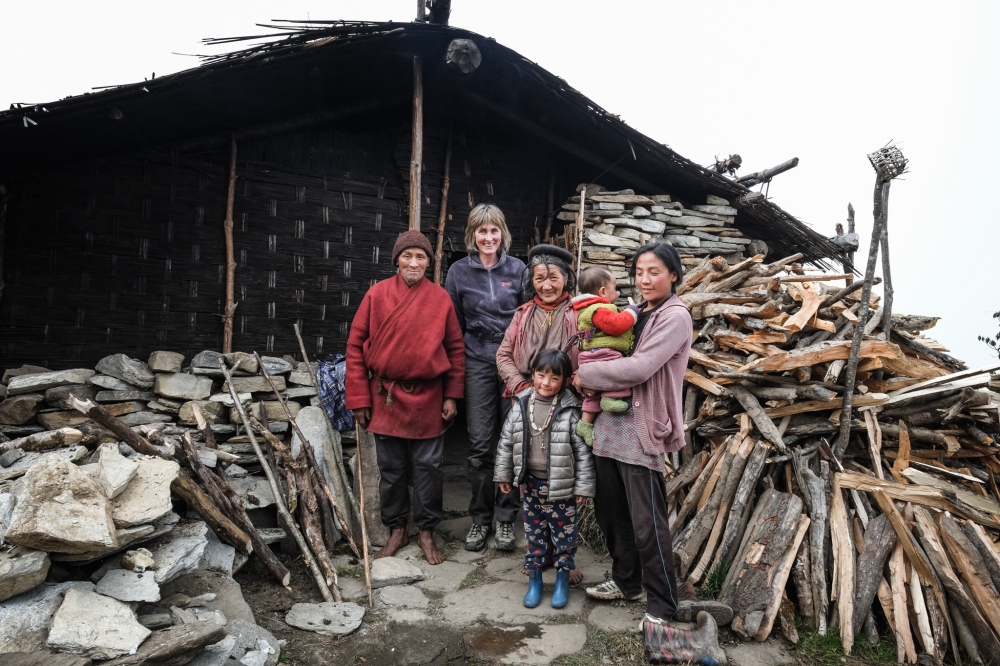