For the times they are a-changin’

Theng, my Lao driver, had taken me on a detour way up in the North of Laos so that he could continue chuntering about the Chinese and their big new road developments and all the new ‘Chinese only’ hotels that were springing up everywhere, using the Lao people as cheap labour. He had a valid point, and the encroachment by stealth was clear to see.

We came across a group of young Akha Nuqui women who had stopped off for refreshments at a local shop, and it struck me  that they looked rather out of place, marooned symbolically in the midst of all the modern Chinese developments and roadworks that were going on. 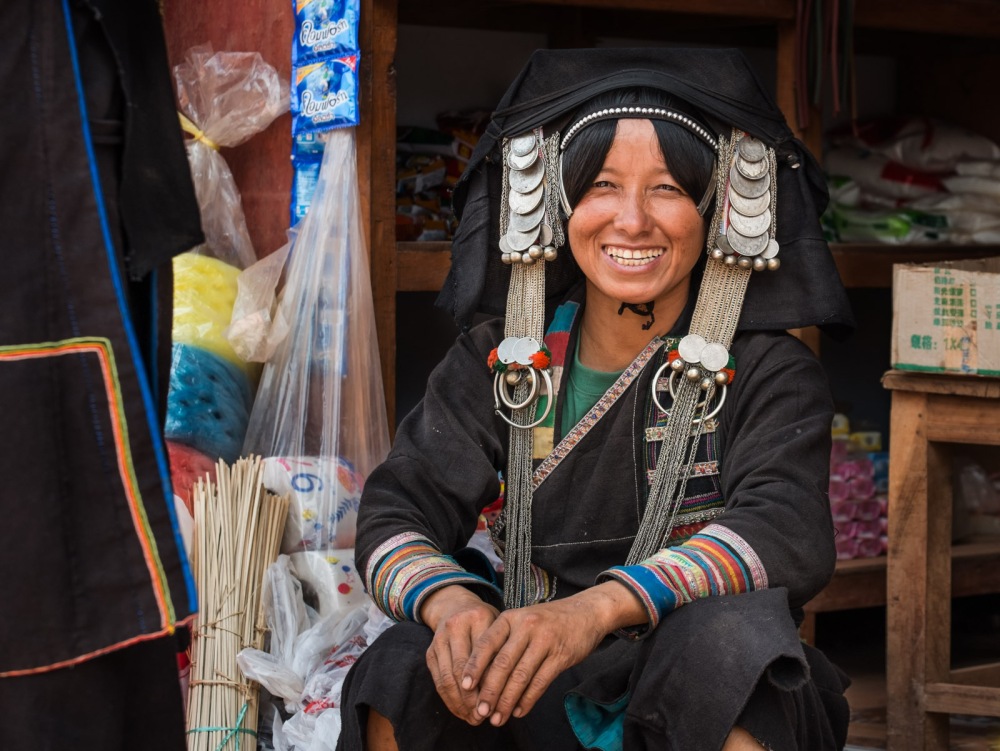 The Akha have been in Laos for about 200 years, until now preserving their culture in remote mountain villages. 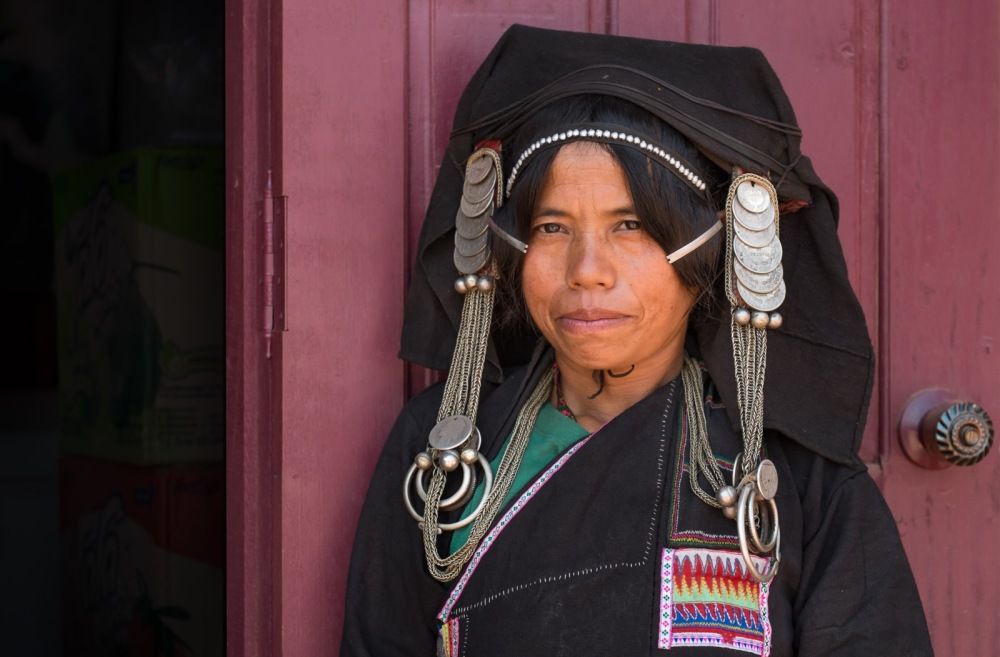 Increasingly, the influence of modernisation is coming to bear and many are moving to the lowlands and abandoning their traditional way of life.

There’s considerable variation in their traditional clothing according to which particular sub-group they belong to. These ladies wore indigo dyed homespun and handwoven hemp dresses decorated with brightly coloured appliqué cotton embellishments, and headgear adorned with silver, and weighing up to 10lbs, symbolising both their marital status and wealth.

They were in a fun mood and we enjoyed some banter while we bought them some drinks and Theng practised his flirting skills again, while I did them some instant polaroid photos for them to keep. One of them didn’t like her image though, and handed it back to me insisting that I do a better one.

I tucked the reject into my pocket (they’re 50pence each you know!) and did her another one. They picked up their baskets, adjusted their headdresses and set off for the long return walk up the mountain, wearing only flip flops or bare feet, and Theng and I turned around and started our journey back South. 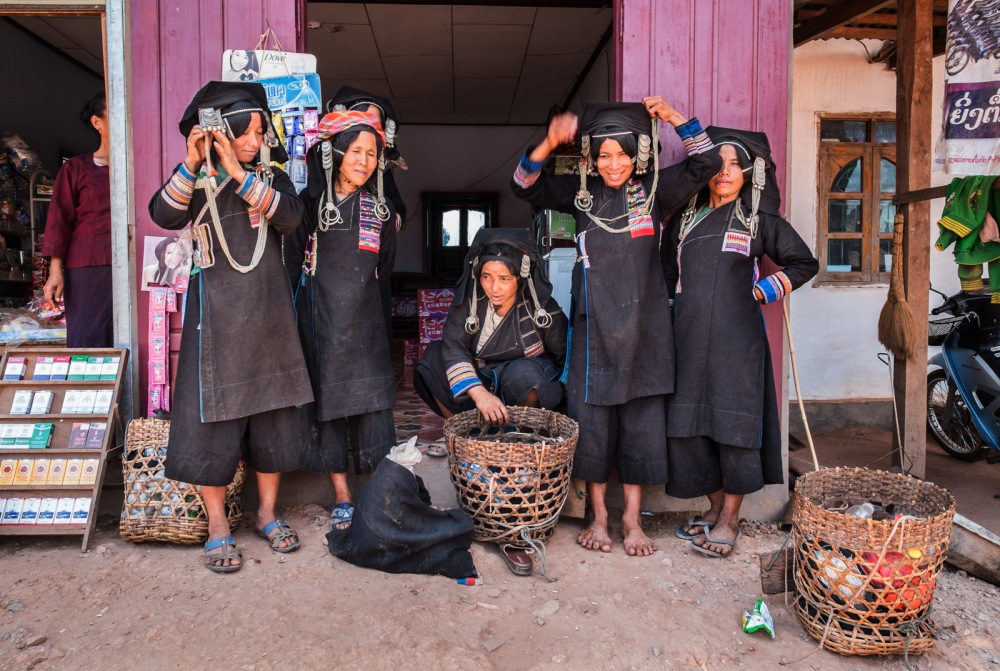 A week or two later, I was in Northern Thailand, near Chiang Rai, staying in an Akha village. The Akha there were quite different to the Akha Nuqui I’d met in Laos, and one evening, while I was telling them about the Nuqui, I remembered the little reject photo which I still had, and gave it to one of the Akha ladies from the Thai village.

Api Gu, the Akha grandmother of the family I stayed with in Thailand

I was quite surprised at how fascinated they were to see a photo of their counterpart in Laos, and they animatedly discussed the differences in the Akha Nuqui clothing and headdress and passed the photo round.

I went to fetch a book I’d picked up in Laos from TEAC, the Traditional Arts and Ethnology Centre, and showed them the section on the Akha people. 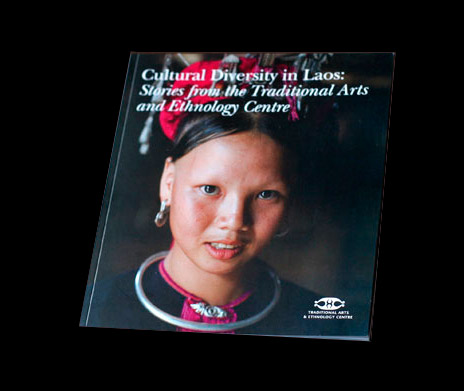 Several of the older women huddled round the book poring over the photos for quite some time, pointing to them and discussing them with a great deal of interest.

I thought back to the brazen new Chinese road where the reject polaroid had been taken, and to the contrast with the mountain tracks the Nuqui women were taking back to their village homes, and how far the world had changed in the lifetime of these elderly Akha women I was staying with in Thailand. With limited mobility and communications the only other Akha they would have come across would have been from neighbouring villages and towns. Their knowledge of the history and heritage of the Akha would have come down the generations only through word of mouth. Nowadays, most of the younger Akha are connected on the internet and with mobile phones, many speak English and travel, and increasingly they live outside Akha villages.

Fern, the granddaughter of Api Gu checks her iPhone during a visit to the family village where she no longer lives since gaining her degree and finding employment.

With changing lifestyles, upholding aspects of ethnic identity such as clothing and language is a challenge, but the influence of increased connectivity is not just a negative one. Particularly since my return, I have seen how social networks are socially cohesive, connecting and unifying people from ethnic minorities, giving them a forum for sharing and reinforcing their cultural identity (see for example: https://www.facebook.com/AkhaCoverSongs?fref=ts on Facebook)

The young people I met were very proud of their heritage and keen to hang on to it, though they were equally keen to benefit from the opportunities that come with modernisation. It will be very interesting to see how this dichotomy plays out. It also feels like a very special time to be travelling and making some photographs which bear witness to a way of life which after centuries of surviving is now being challenged in an unprecedented way.

‘The times they are a-changin’ – Bob Dylan