Beyond All We Can Imagine

As part of my semi-obsessive research for my next photography trip to Ha Giang Province in the far north of Vietnam, I came across a You Tube clip of an inspiring man, Mr Thang, who had overseen some charity work in the area.

I was heading to the mountainous area near the Chinese border, a landscape formed of limestone karsts where huge pyramid shaped peaks form mountain ranges and the earth is rugged, covered in rocks which give way to caves and grottos.

I listened to his moving description of life for the ethnic minorities who live in this harsh environment: “It’s extremely difficult for them, beyond all we can imagine, when the temperature drops to 5°C children don’t have any warm clothes or sometimes they don’t have any food for an entire week and if they have, it’s only corn not even rice. No-one can imagine children walking 2-3 hours to fetch water during winter.”

My preparations continued and the clip slipped to the back of my mind in my excitement to meet and photograph the people of the area, but just before leaving I played it again and packed in some outgrown warm childrens’ clothes donated by friends into the last remaining crevices of my luggage.

I felt a bit bad that my camera gear had squeezed out some of the donations and asked my guide Chô if we could stop on the way to buy a few more clothes to donate. I think we just had a different idea of scale.

Reaching Ha Giang, the irrepressible Chô took control. Being a Hmong himself from the same area, he was able to tell me which clothes the people would need and want, and extended the shopping list to include facecloths, hair ties, thick gaudy-coloured Chinese blankets, various household items and several large sacks of rice.

Adept at negotiating, within no time we had job lots of everything on his list and a bemused Mr Quyen, our Vietnamese driver, set about cramming it all into the van.

Loaded up, we left the town and headed up the winding roads to the mountains. 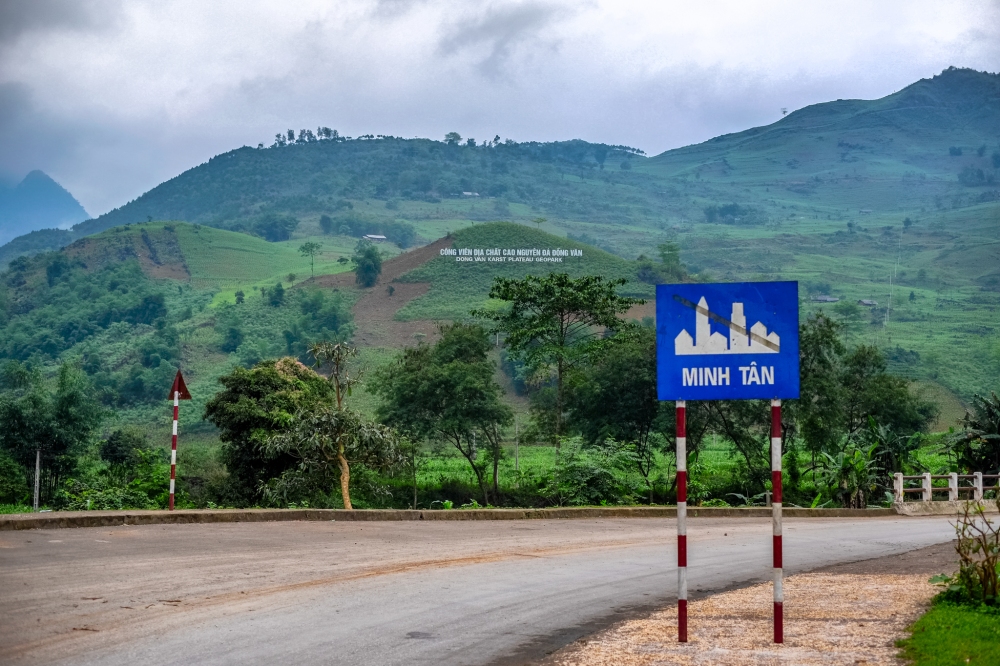 The one and only Chô

We travelled for several days, staying in villages and home stays, and enjoying some people photography along the way. I was grateful that we’d bought the Chinese blankets as some of the ‘beds’ were little more than wooden platforms.

This young Hmong boy had the confident air of one much older, which probably comes of being in charge of your 1yr old sister when you’re only 3yrs old yourself.

Mindful that we were several days in, and our mountain of donations hadn’t started to go down, I kept wanting to give them out along the way only to be told by Chô that ‘these ones aren’t poor enough’ and ‘she lives in a concrete house – just wait’ or my favourite one ‘she’s got ducklings she’s not poor’. I guess all things are relative.

I stopped to photograph some children in the rain, loaded with brushwood, and they must have looked ‘poor enough’ as Chô gave them some of our facecloths and hair ties which seemed a bit random to me but the girl seemed please enough with her hair tie though I’m not sure they knew what the facecloths were for.

A young boy was wandering along on his own on the roadside, carrying a scythe.

Thanks to Chô speaking Hmong, we chatted a while and I took a couple of photos.

Chô went to the van and chose a donated pair of warm trousers to give him.

He looked less than impressed and I looked at the mound of bags we had with us and began to doubt whether it had been such a good idea after all.

We continued our journey past steep ravines and round hairpin bends climbing ever higher towards the misty looming pinnacles of the Dong Van Karst, spotting scattered dwellings clinging to the sides of the mountains as the patches of flat land got fewer and fewer. 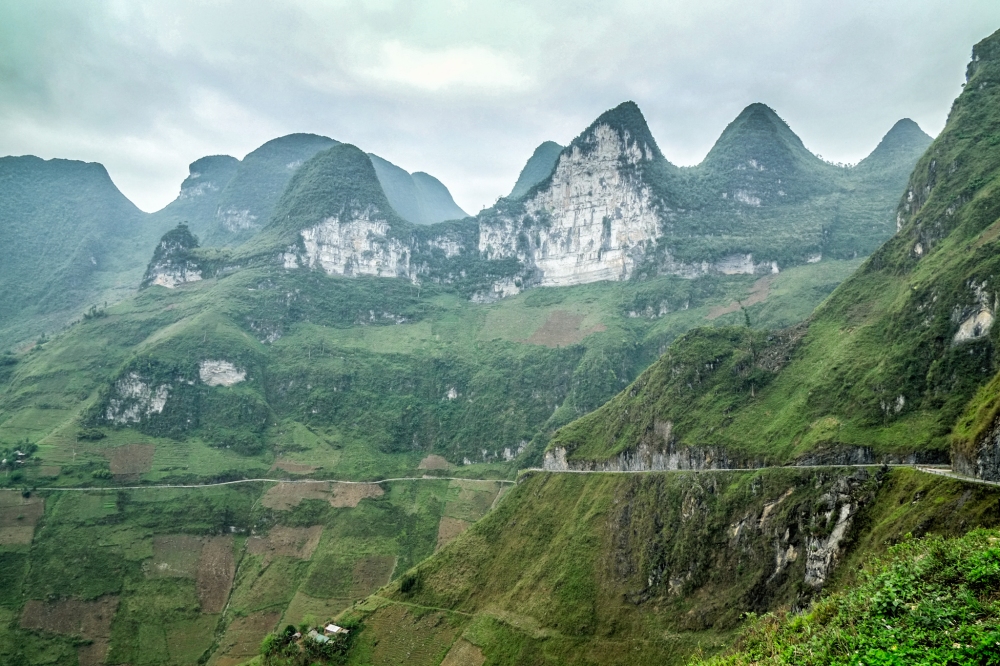 Though the landscape was undeniably very impressive, it was relentlessly ‘dreich’ – that useful Scottish word meaning a combination of dull, overcast, drizzly, cold, misty and miserable weather. As we got higher the rice terraces gave way to patches of corn grown in the most unlikely crevices between the rocks. 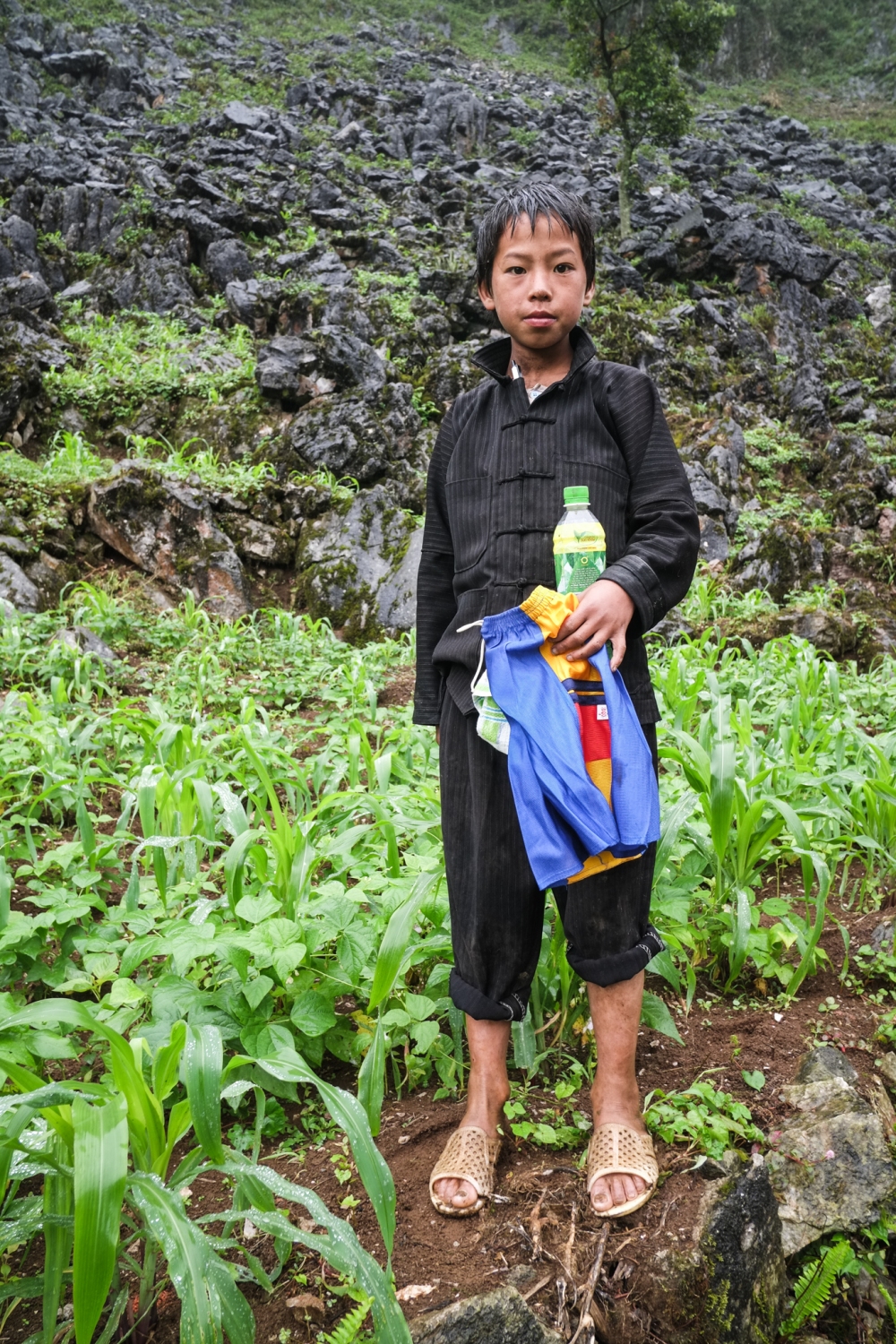 This boy wearing the traditional clothing of the Green Hmong was given some shorts. I was concerned about giving out Western style clothes but Chô assured me that they all wear them in summer anyway.

Once in Dong Van, we visited the weekly market and added some traditional scarves, skirts and black jackets to our collection, and the baskets the locals use for carrying things on their backs. 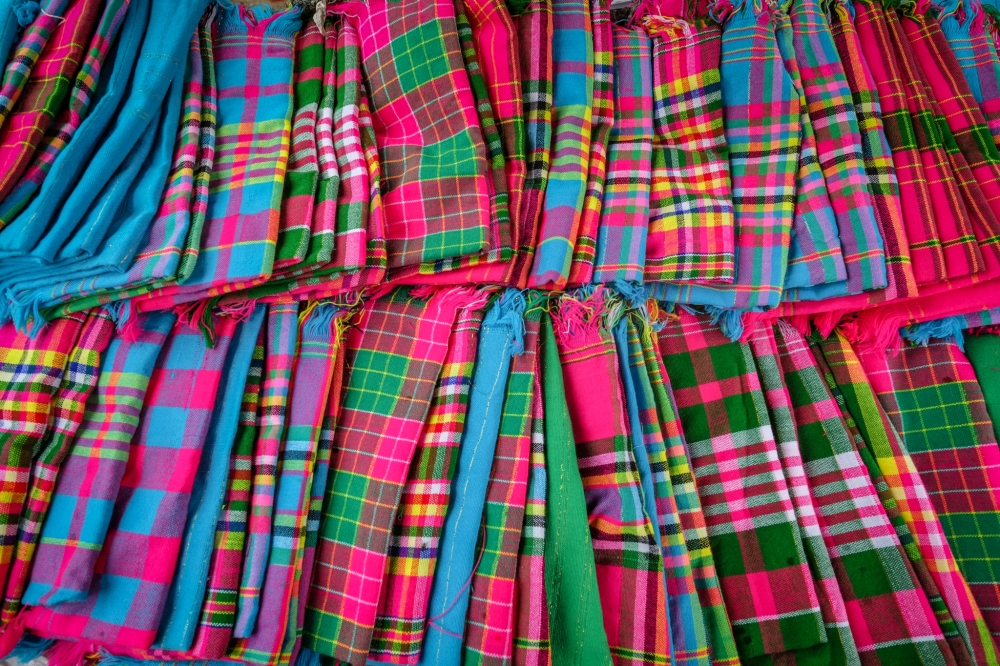 The next day we travelled along the Ma Pi Leng pass, a narrow winding road with sheer cliffs on one side, famous for its spectacular views. I was disappointed that despite being in the supposed dry season, it was again raining and there were no views at all to be had. Not a great day for the photography I’d been dreaming of in the planning stages.

Part way along the pass, the van pulled up and Chô got out and started hollering to some workers in the field below. They stopped their work, and came up to the van where My Quyen and Chô had started unloading the bags of donations.

As is so often the case when travelling in Asia, it became apparent what was going on only some time afterwards.

With everyone loaded up, they started up the mountainside led by Chô. Not quite sure where we were going, I started to follow on with increasing difficulty as the ground was uneven and slippery and the wet mud was thick and sticky so the soles of my posh vibram gortex boots got clogged up and had no traction, and I have difficulty walking far anyway due to neurological damage.

They soon got far ahead but Chô kept coming back for me and helped me up the hill. Several times he left me perched on a wet rock saying he’d be back and I wondered what I was doing stuck up a mountain in Northern Vietnam, soaked to the skin, no idea where I was with the mist coming down and a pair of useless legs that refused to work.

Everything up here has to arrive by foot and I met a group carrying some roofing sheets on their backs seemingly effortlessly wearing flimsy looking footwear. 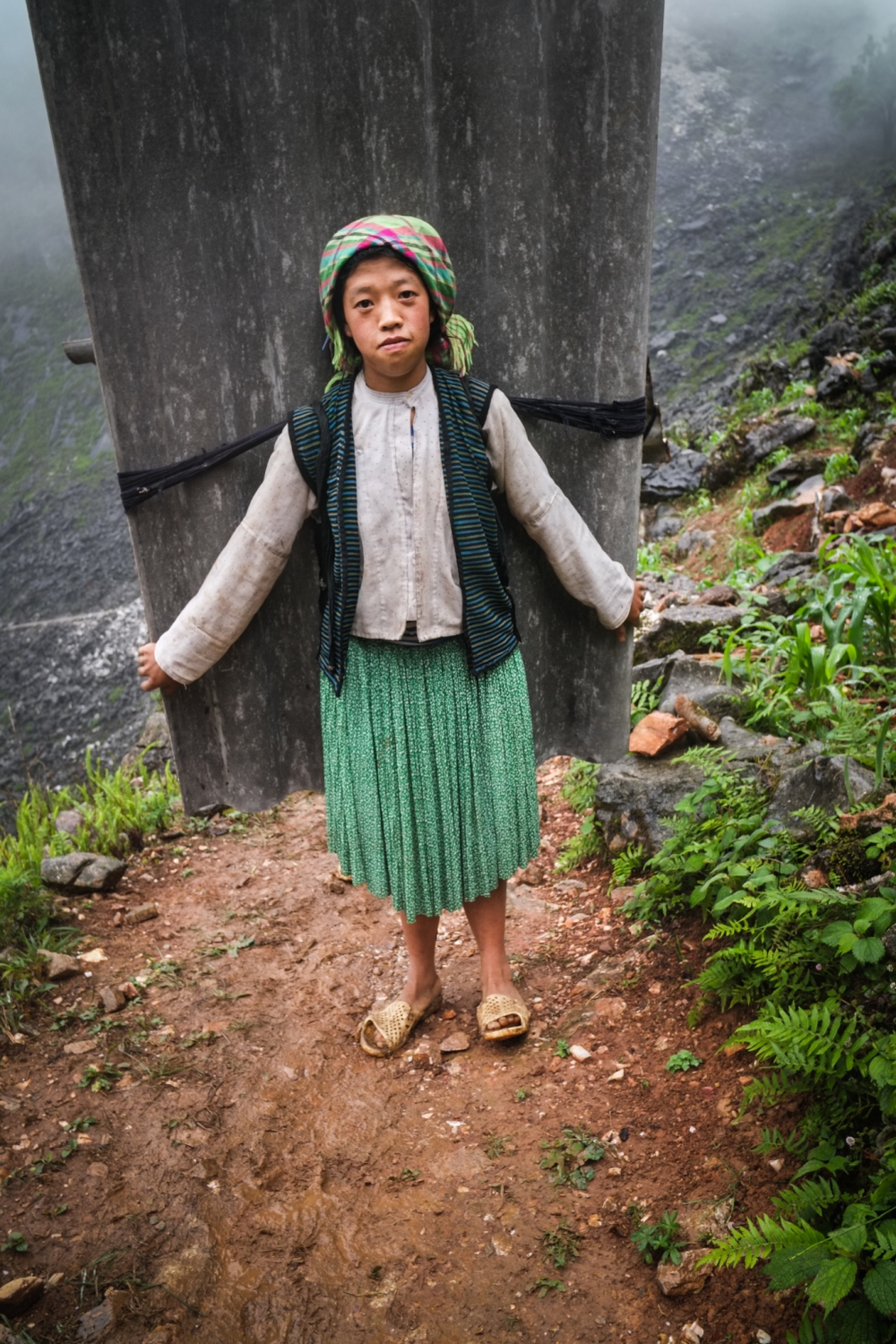 Spurred on by their resilience I soldiered on as best I could trying not to lose Chô and his gang as they progressed up the wet mountain darting into little houses that appeared on the hillside dropping off the contents of the bags as they went.

Even up here where people seemed to be living in the harshest conditions Chô seemed to be taking great care to find out who the neediest ones were and where they lived. Frustrated by not being able to reach all the houses they visited I gave one of my cameras to Chô and set the settings at my ‘best guess’ for the conditions. The photos he came back with were stunning. 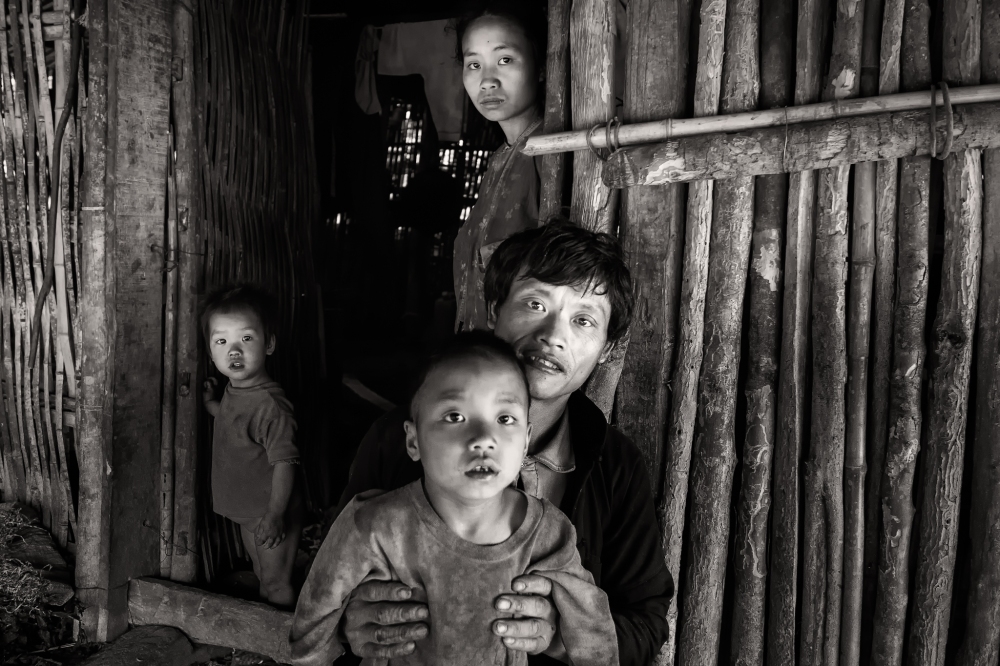 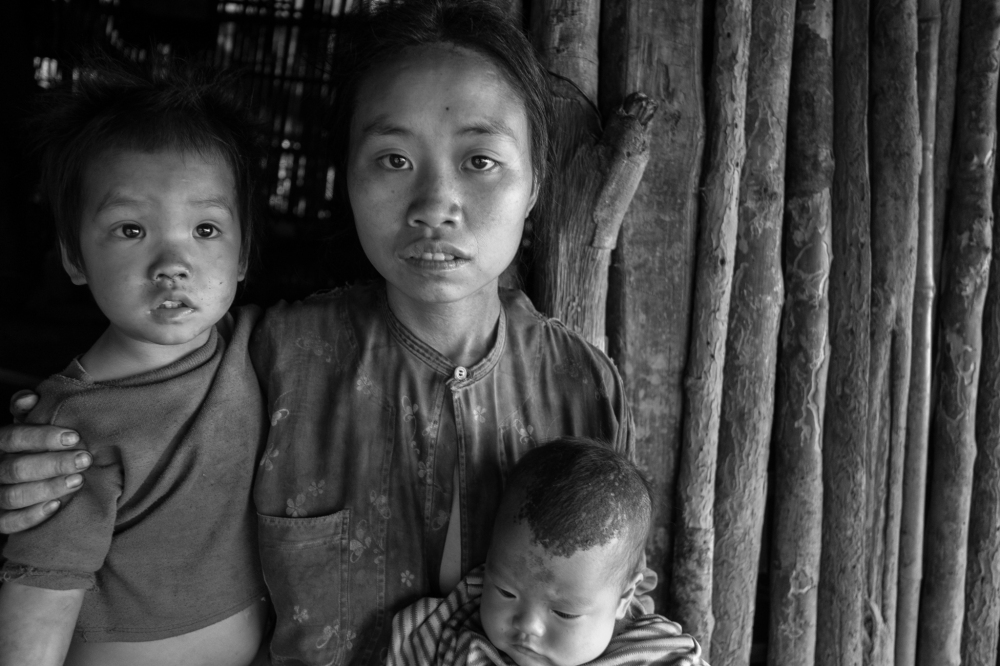 This was one of the poorest families and they got one of the big Chinese blankets as well as clothing.

A small settlement emerged from the mist and we were met by children running to see who was approaching. 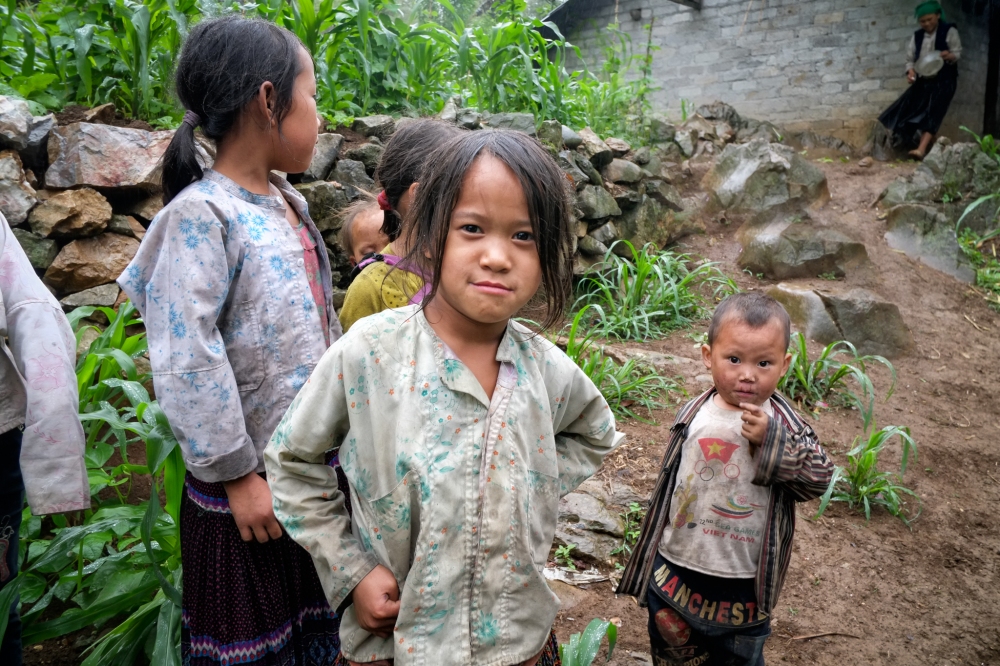 Seeing that we had sacks of rice with us women ran out from nowhere with bowls for their share, many improvising with carrying it in their aprons or scarves.

Chô fills a scoop with rice 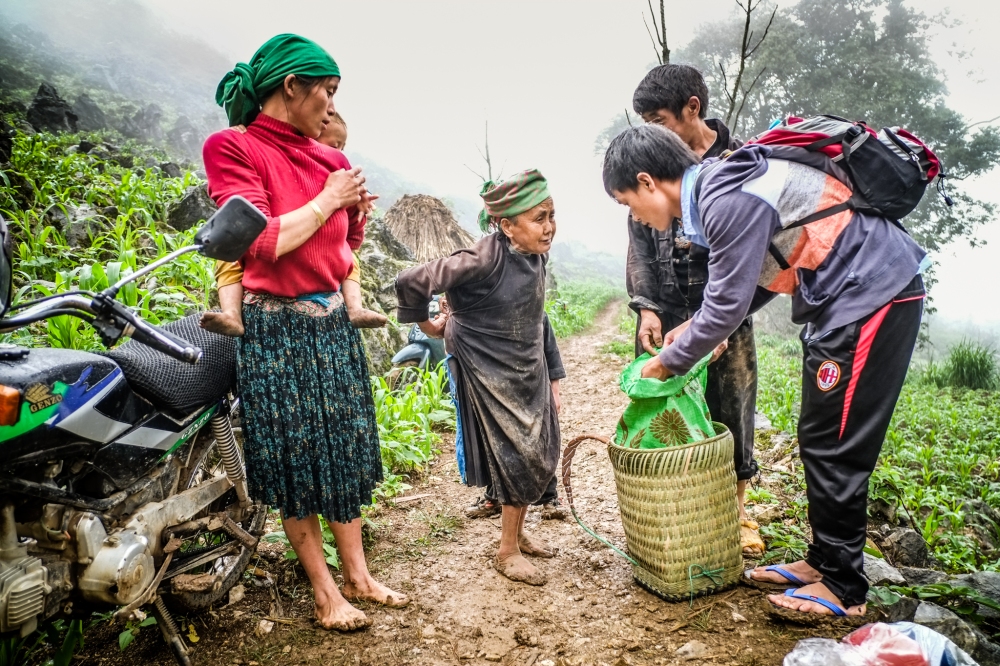 We’d brought a few balls and toys for the children too and tried to make sure that everyone got something no matter how small.

The community themselves led us to the homes of some of the most needy. 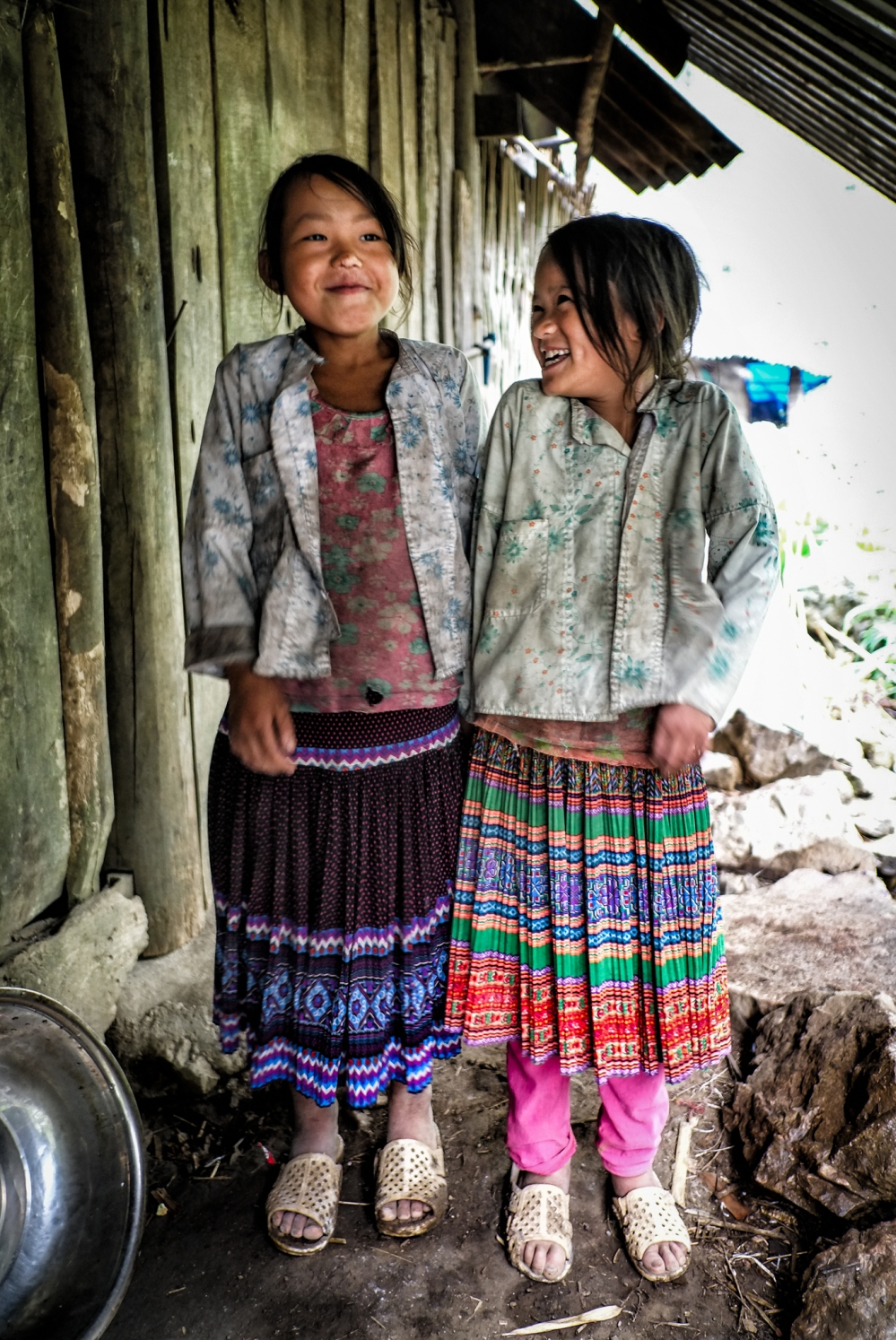 The mother of the children in the photo below had married in her early teens and now had five children. She pulled up her scarf for the photo to hide her teeth, several of which were missing or rotten.

We were warmly invited inside by many of the families and were privileged to be able to glimpse what life was like in this unforgiving landscape.

We met an elderly lady with only one eye, contentedly sitting by the fire, who had lived all her life on the side of this mountain, amongst these rocks. 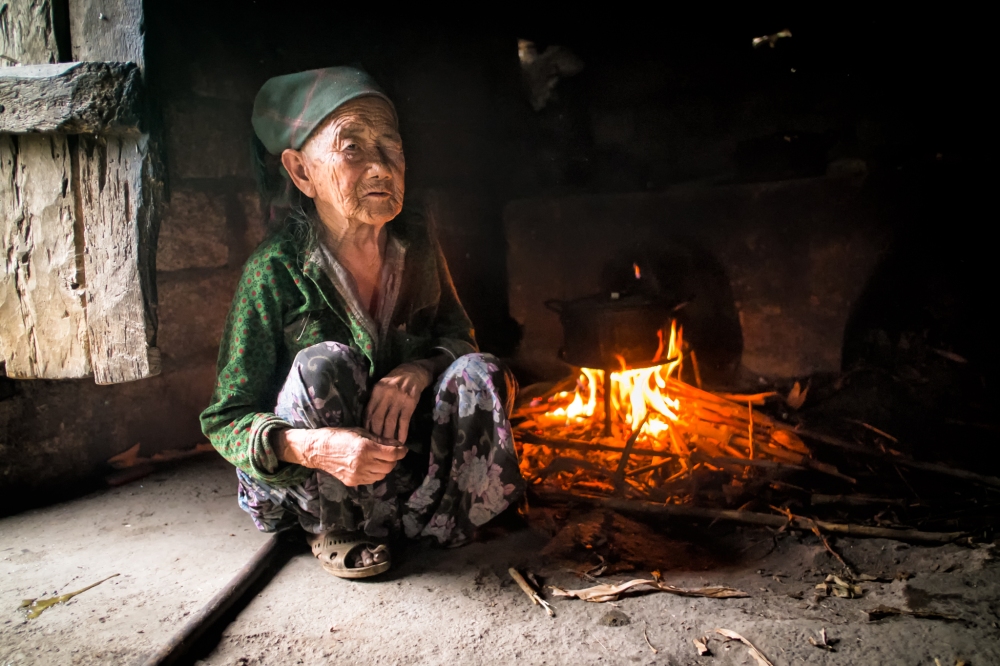 I couldn’t begin to imagine what her life must have been like.

We continued through the settlement meeting the big brown eyes of these remarkable people living in the most incredibly challenging environment. Far more remarkable than any view from a pass could ever have been. 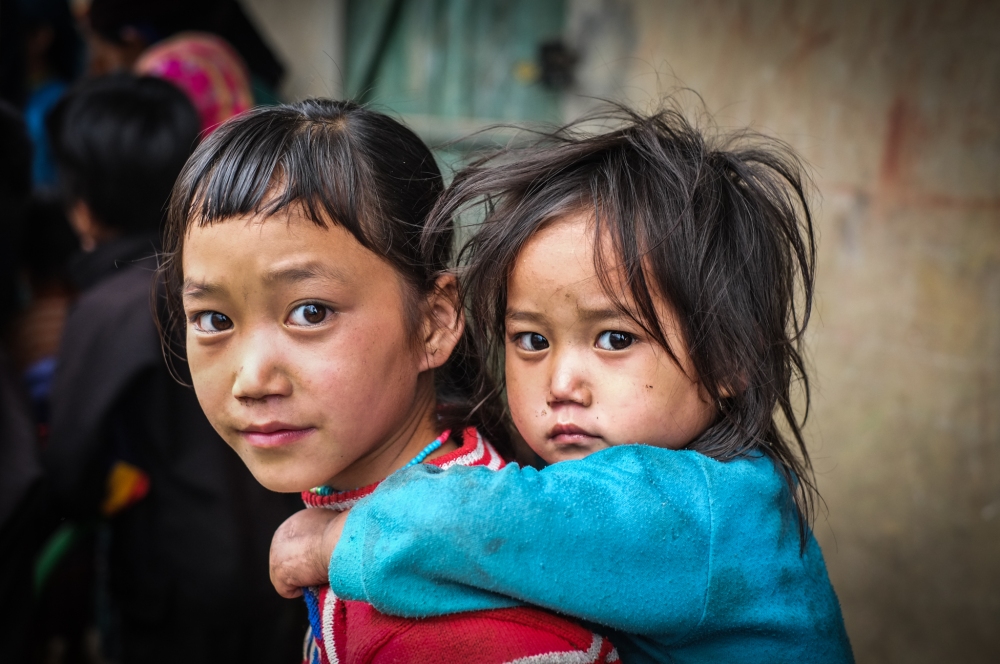 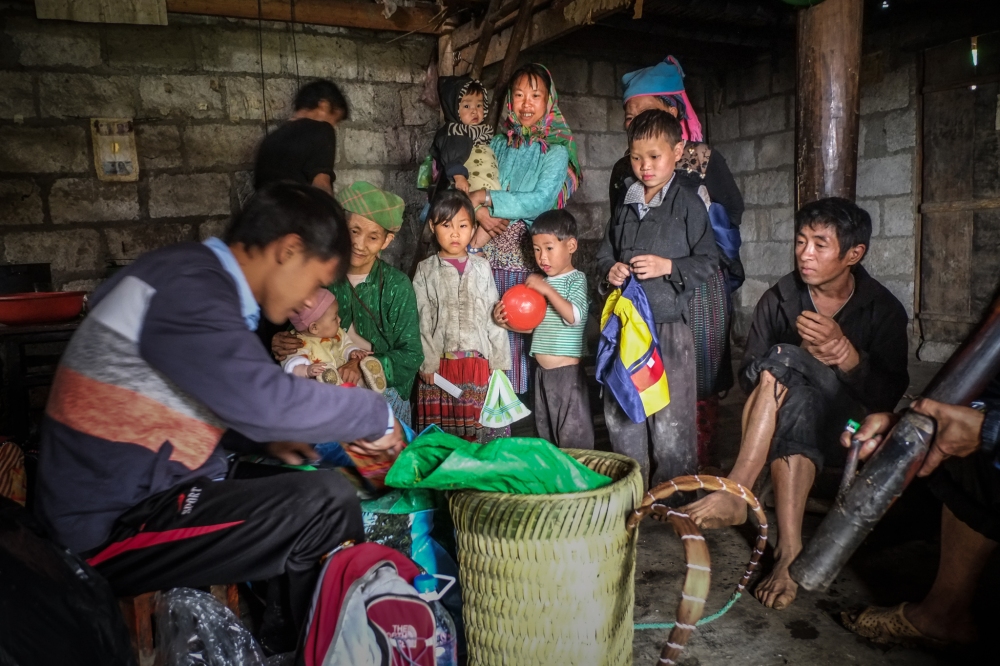 The next house we went to received one of the gaudy Chinese blankets and some clothes. As we were leaving however the mother of the family stood in silence with tears gently rolling down her face. I asked Chô to enquire about the tears and she replied in Hmong “this winter I’ll be able to keep my children warm”. 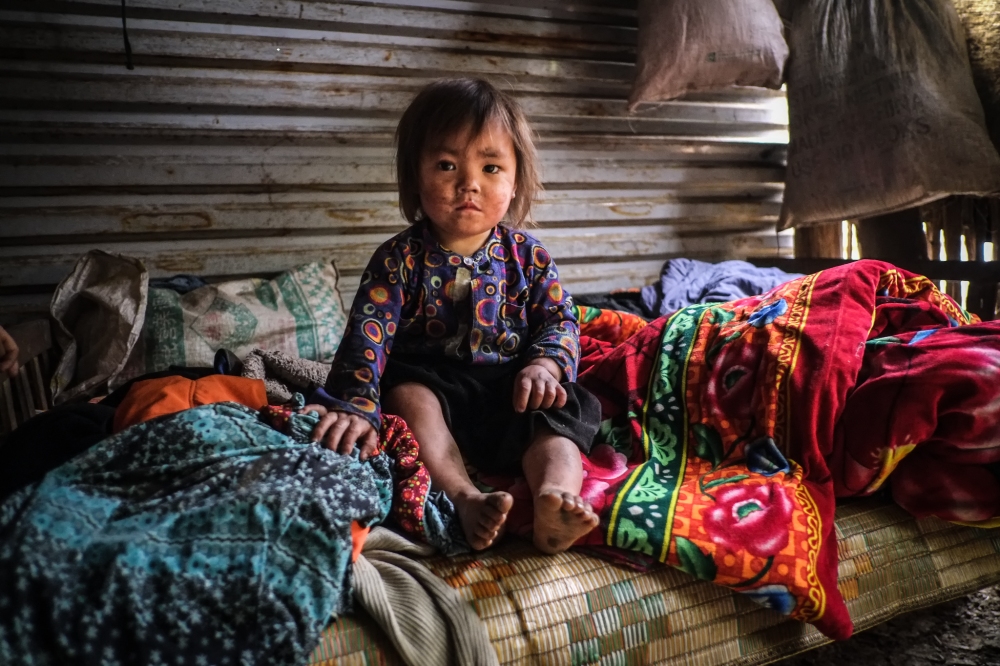 After that we all needed some fresh air. 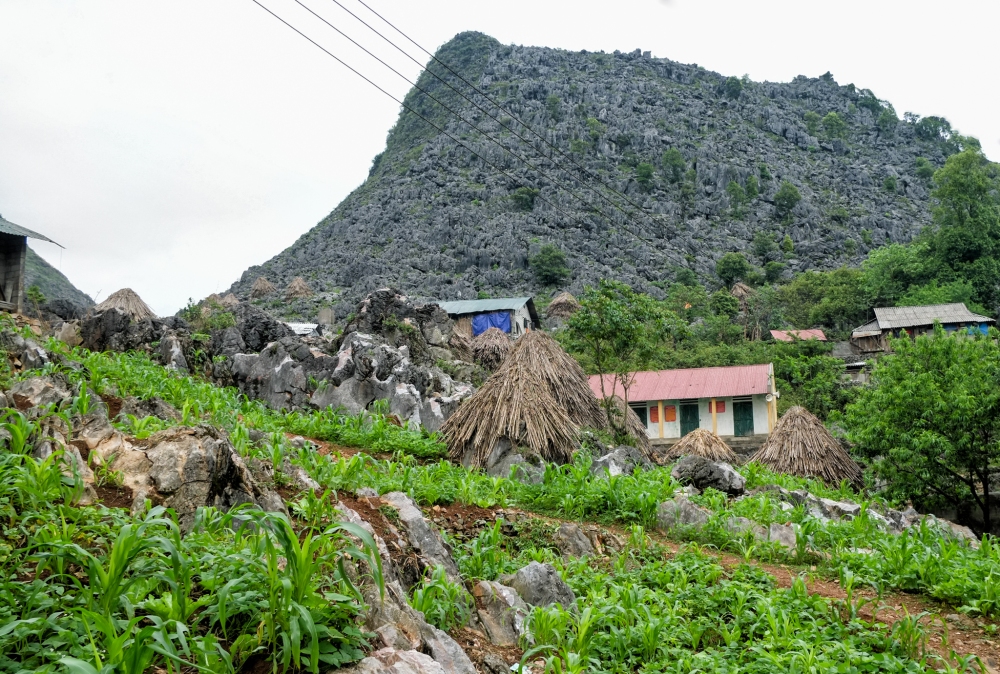 I was taken to see the village water supply, a natural cavern in the ground.

It was no wonder that some of the children looked a bit sick. We carried on, handing out bowls of rice as we went and I hoped it would last long enough to go round. 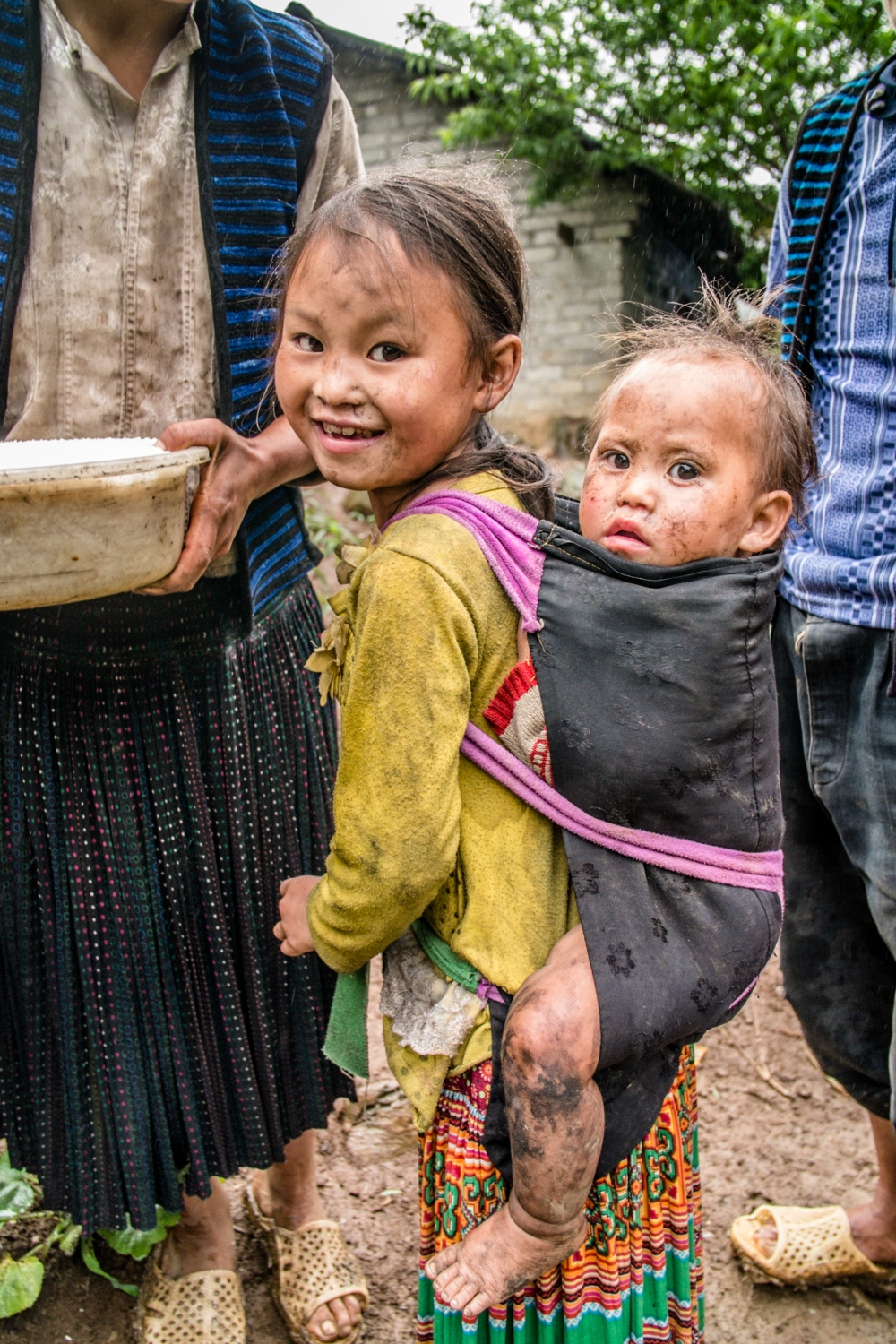 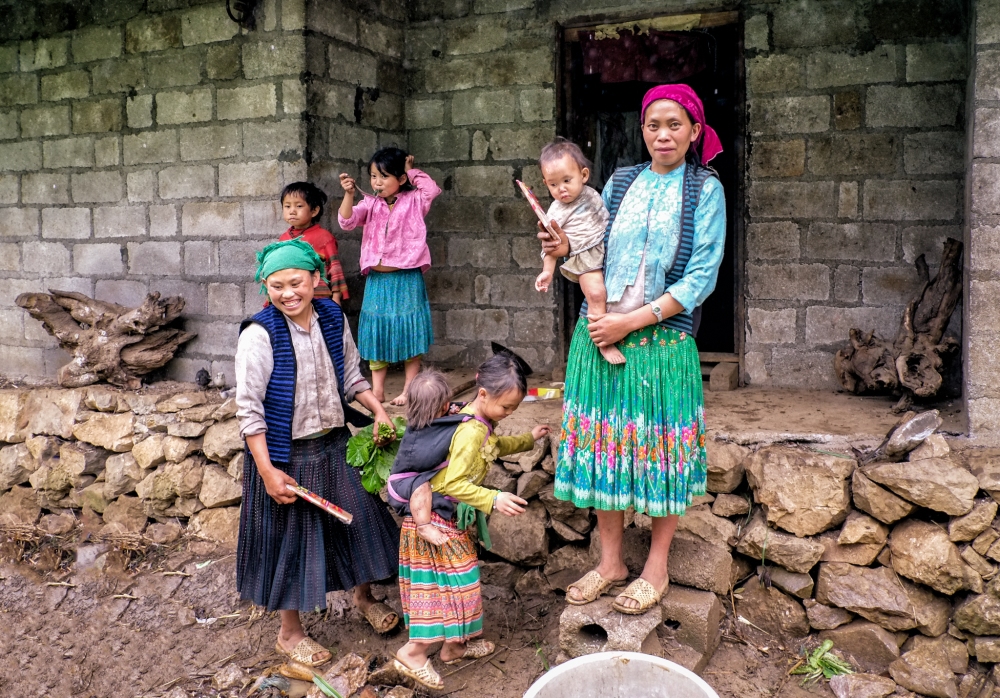 As more people heard of our visit it all got a bit hectic and Chô with his natural organisational talents arranged for everyone to gather at the community building where he presided over a fair and amicable distribution. 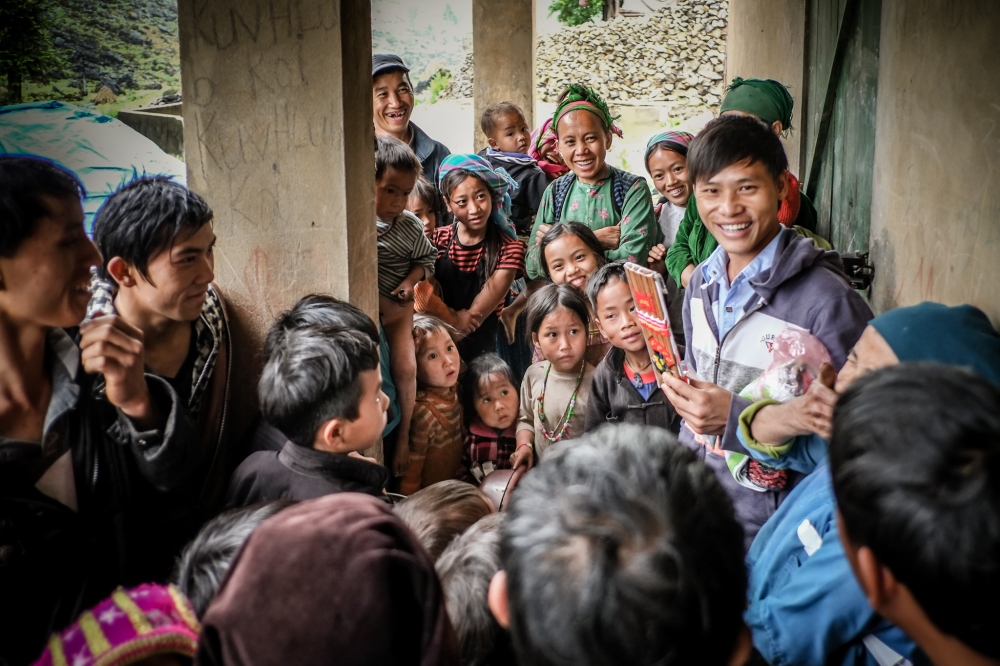 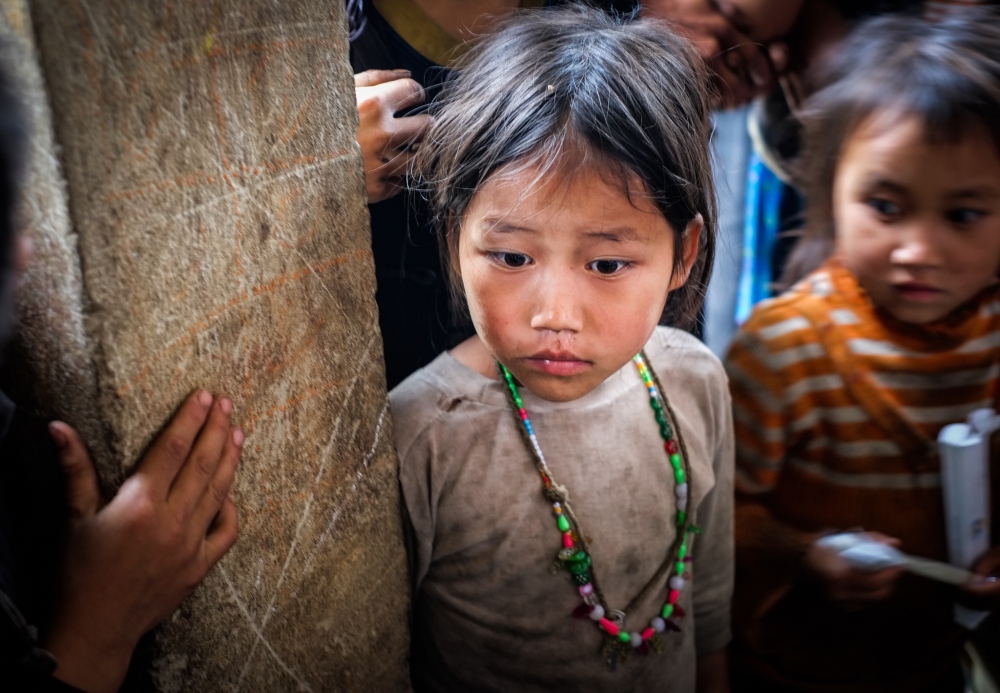 Leaving happy faces behind us it was time to move on. I was relieved that we didn’t have to go back the same way and had a gentler route down, and even more relieved that we still had some things left in the sacks as I saw a few more houses appear when the mist lifted. 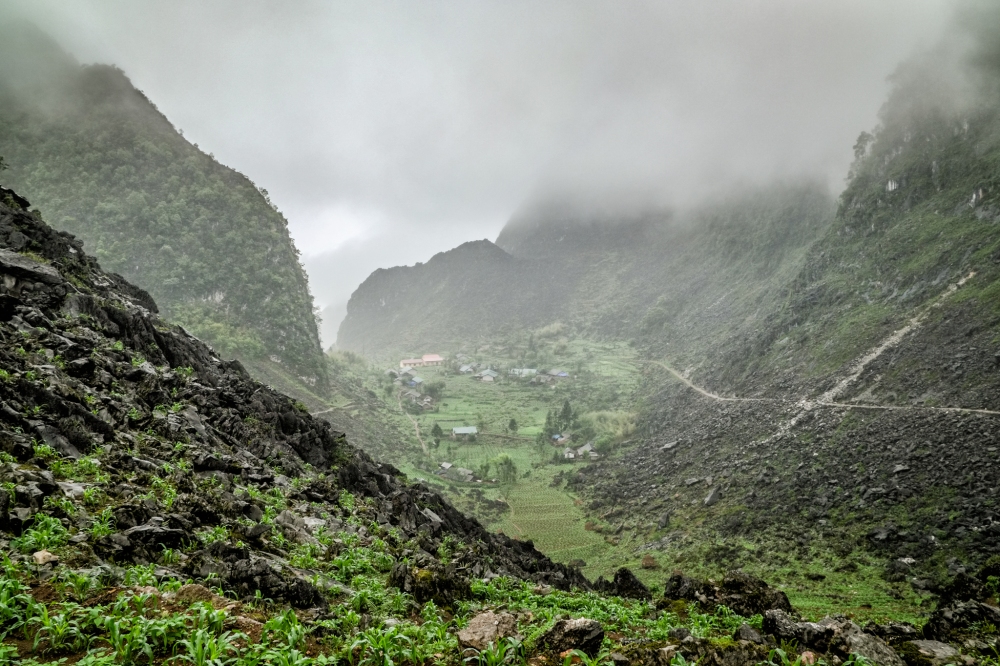 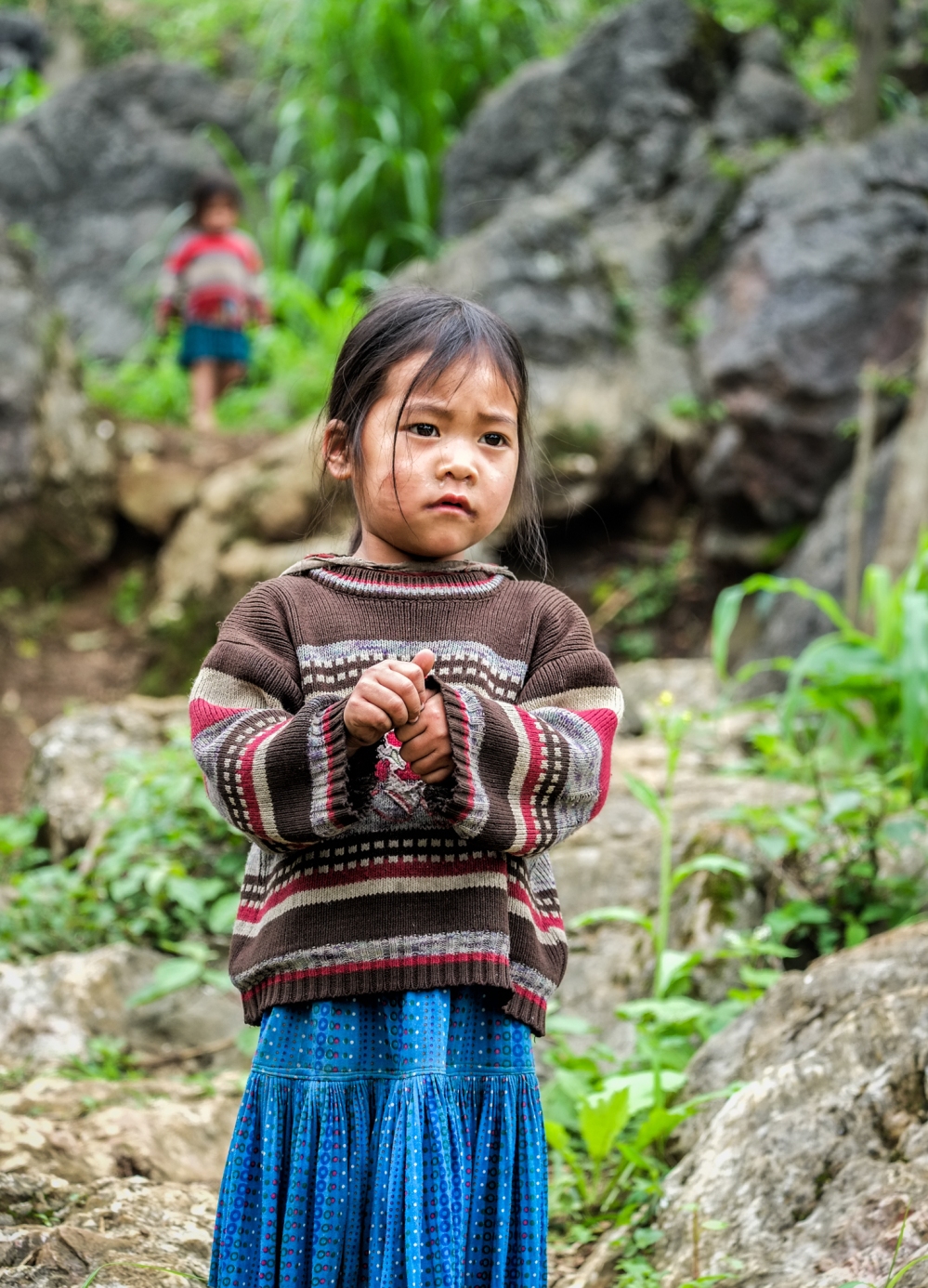 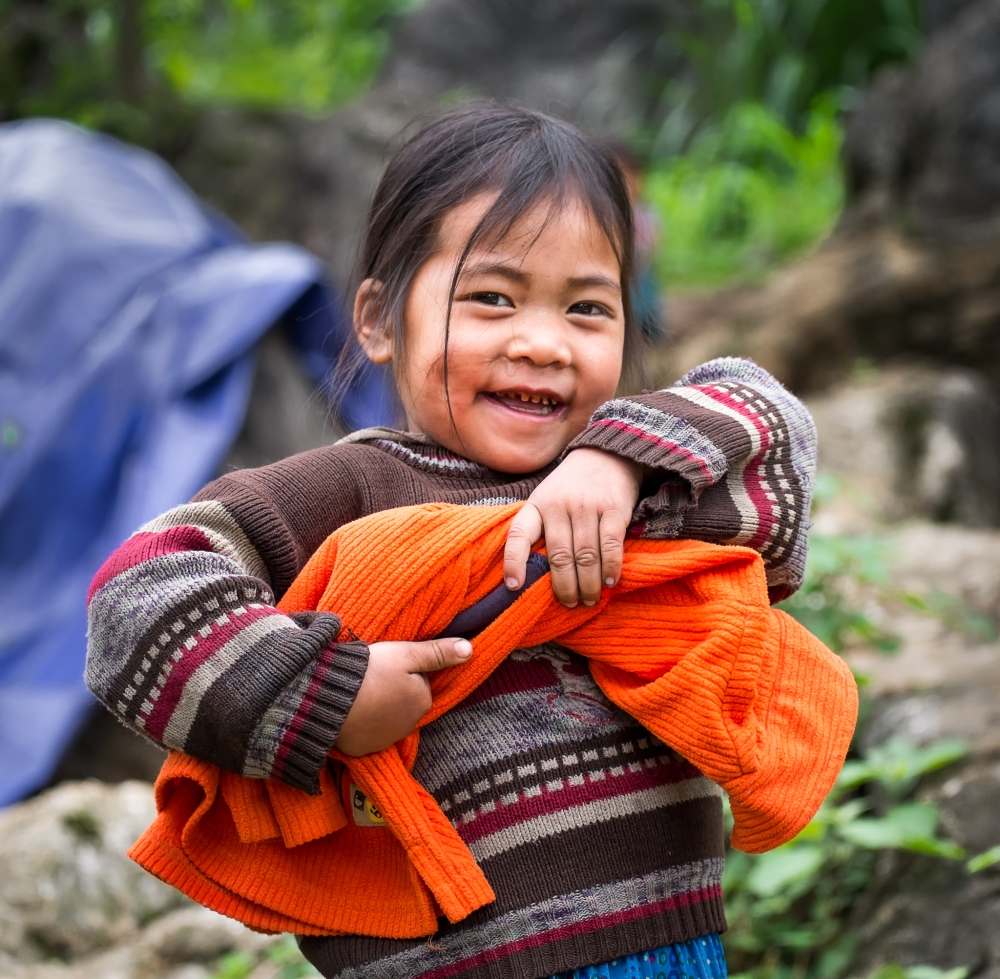 We shared out the last few items between the remaining households and continued down the mountain. 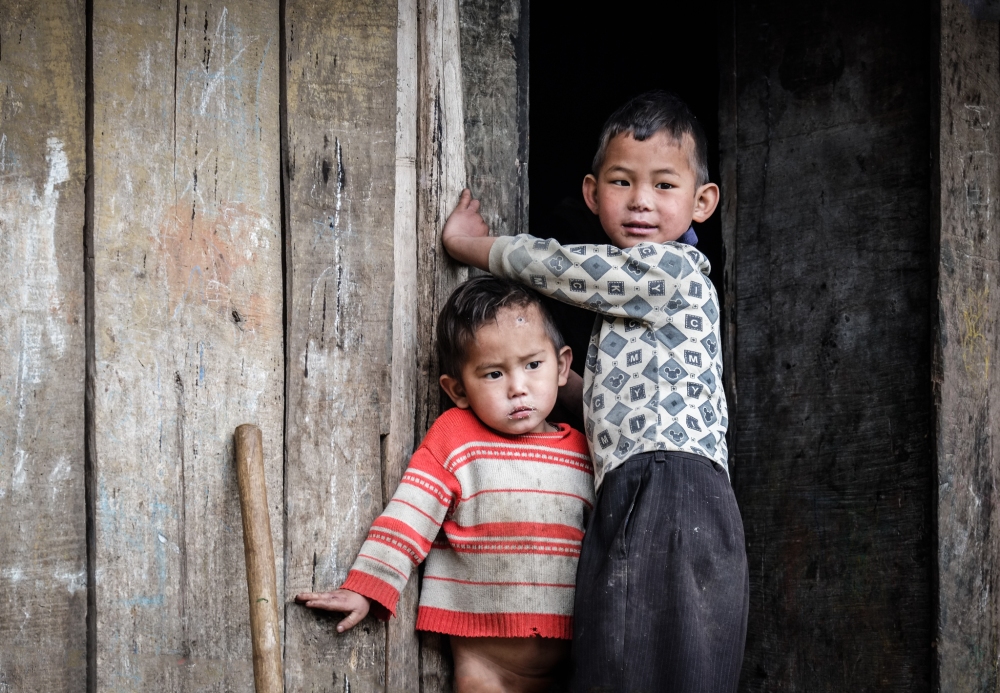 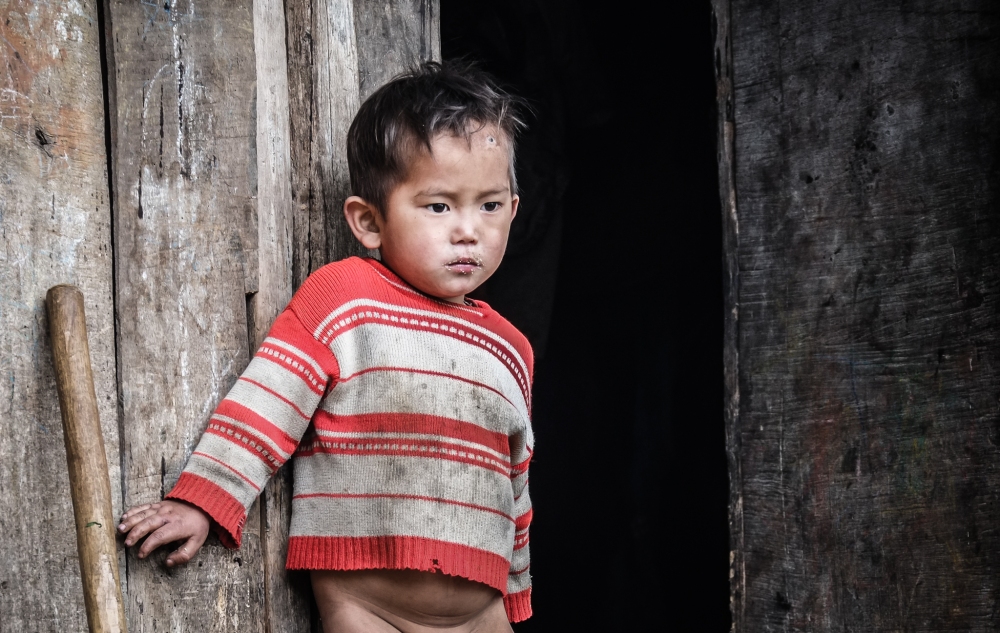 The baskets were almost empty when the road reappeared. We remunerated our helpers and said goodbye. One last donation to a passing mother and it was time to leave. 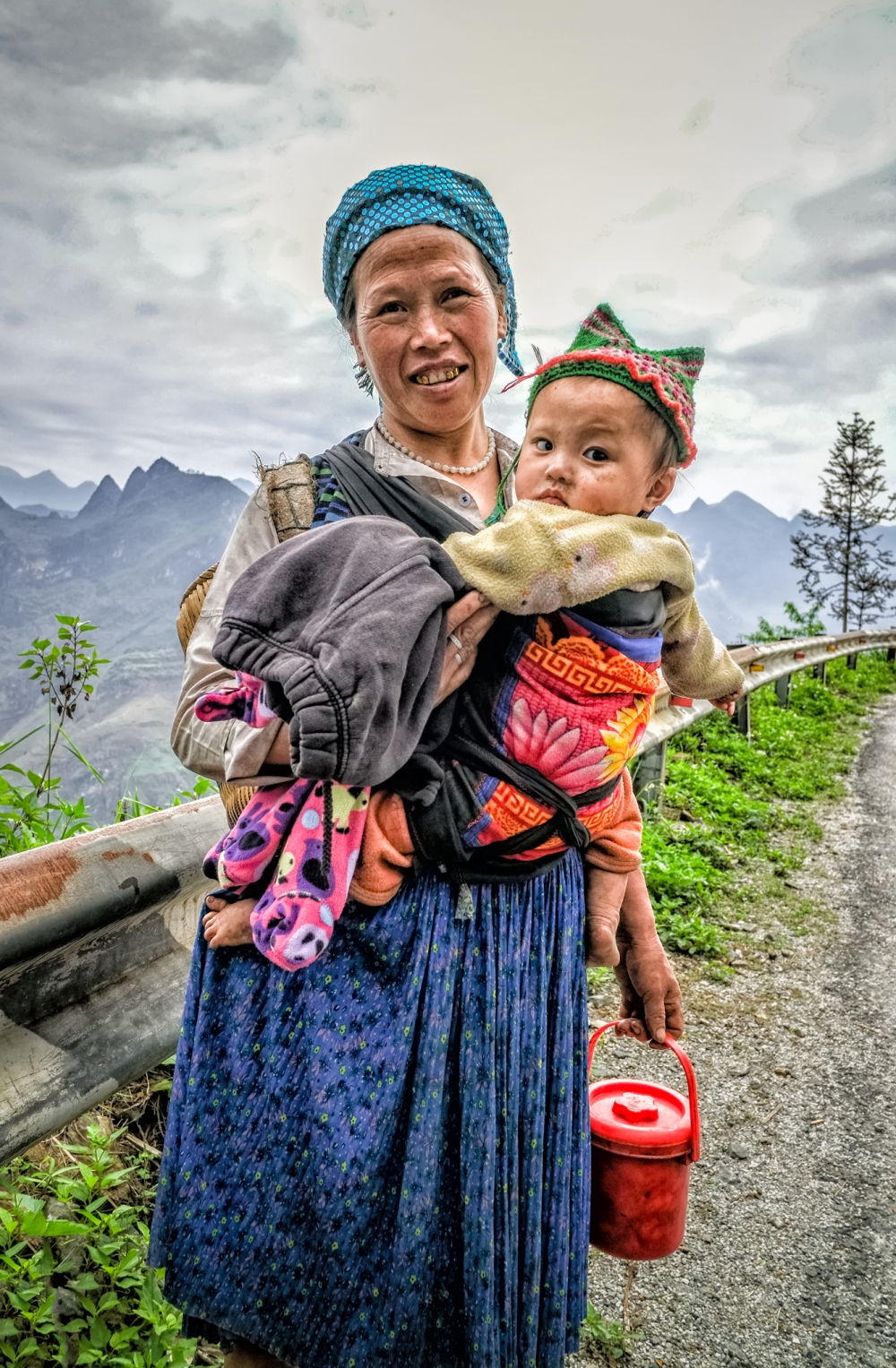 I’d never really intended this to happen quite as it did, having just set off to do some photography, but what started as a small idea took on a life of its own and led me in an unexpected direction. Sometimes you’ve just got to go with the flow, and you find you’re swept along to places you didn’t know you wanted to go to until you arrived there.

The donations won’t change the world, and the rice would only last a meal or two, but maybe the memory that someone had visited and recognised the difficulties of their daily lives and been so impressed by their strength and resilience might last a bit longer.

Certainly for me, the memories of those extraordinary people living lives beyond anything I could have imagined will last a long long time to come, and in some small way have changed my own world already.

Post script: I went on to meet Mr Thang, and learn more about the work PLAN charity are doing and started a more sustained donation through their sponsorship scheme. For anyone interested here’s the link: 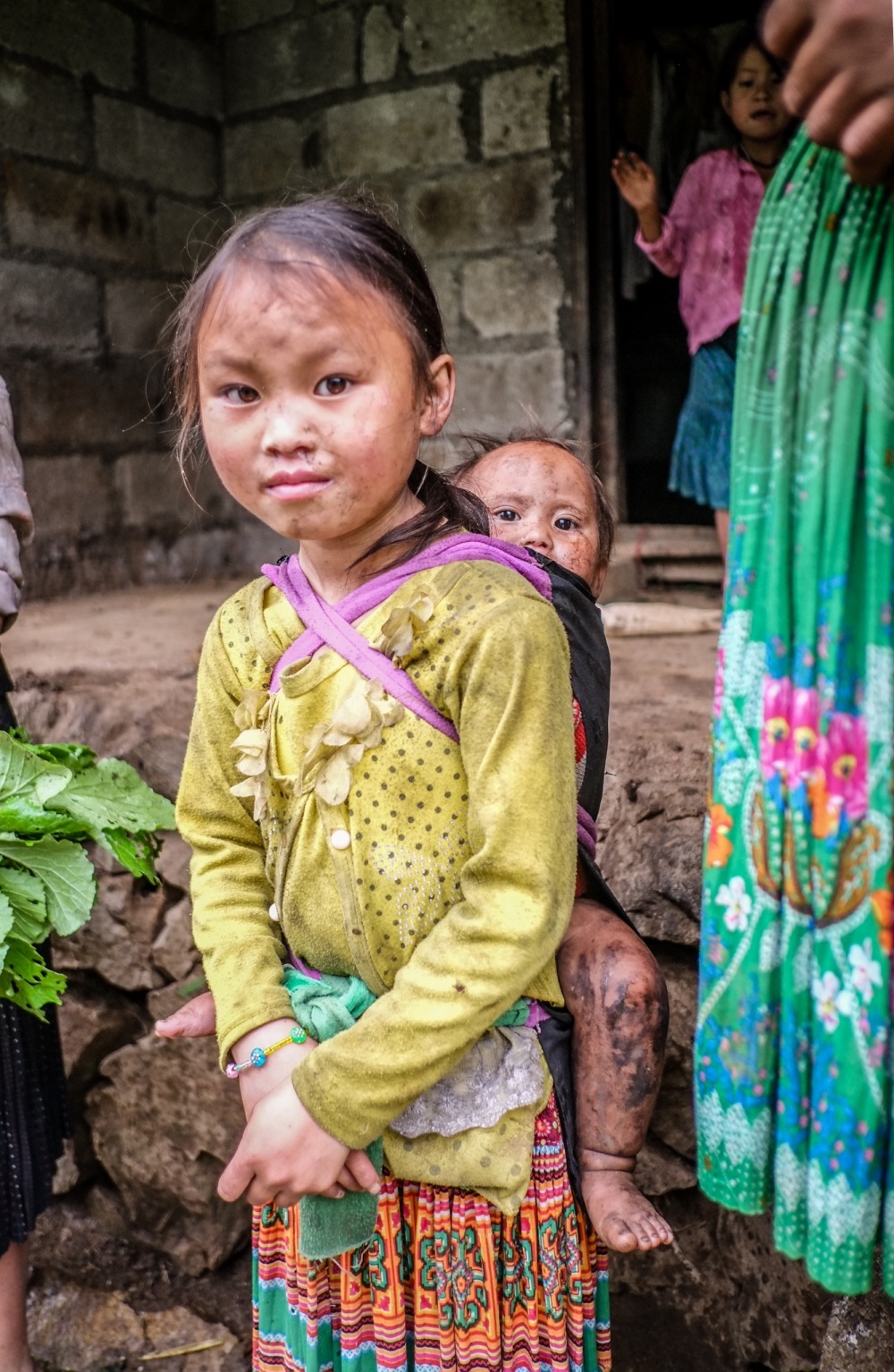