Keeping it real with the Lo Lo

I hadn’t heard of the Lo Lo people that my guide Cho talked of, so it was very exciting to go and visit his Lo Lo friend in the Lung Cu area, far away in the northernmost tip of Vietnam, above the Ha Giang plateau.

We turned up an unlikely looking track on a hillside and continued climbing up it long after it seemed sensible to do so, eventually arriving at a small isolated hamlet with houses built into the mountainside, doors turned to the rice fields in the valley below.

The Lo Lo believe that the forests and land around their settlements are places where spirits reside, and hence, they must be protected. 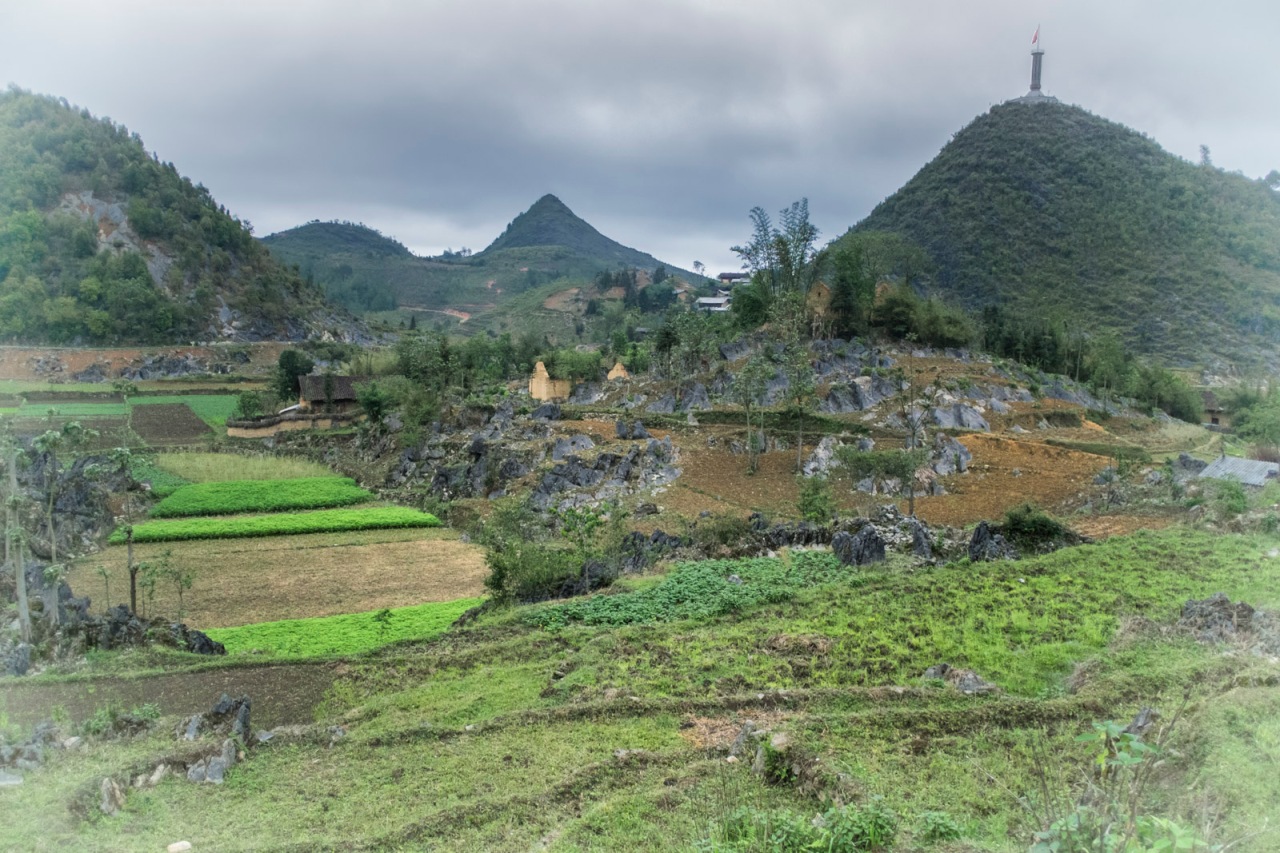 Though relatively few in numbers, the Lo Lo have lived in this area just over the Chinese border since ancient times. They are divided into Black Lo Lo and Flower Lo Lo, and our lady was Flower Lo Lo, so called after their bright and very distinctive multicoloured clothing in stark contrast to the austerity of the landscape. 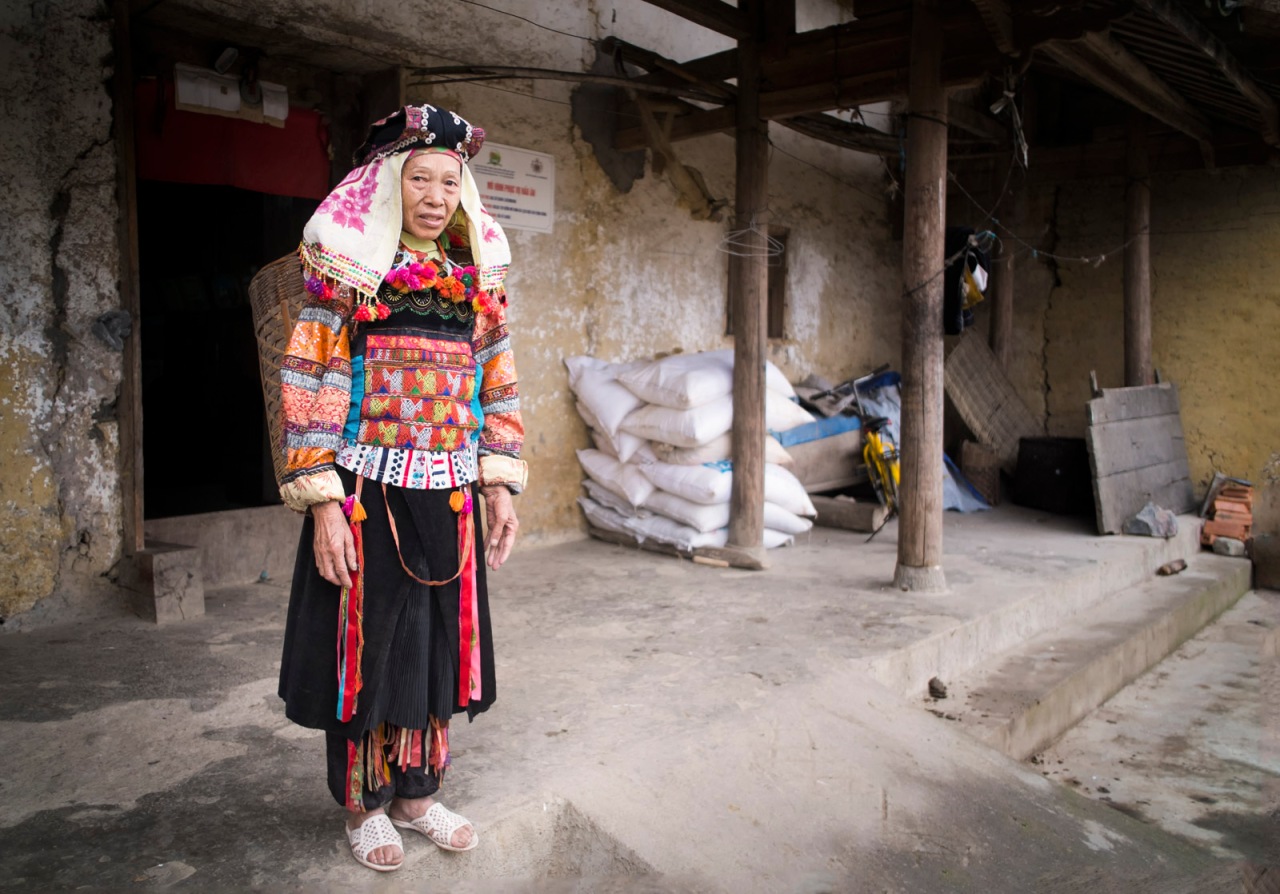 Cho’s friend was clearly pleased to see him and they straight away got talking. Her face looked unsettled though, and they got deep into conversation. 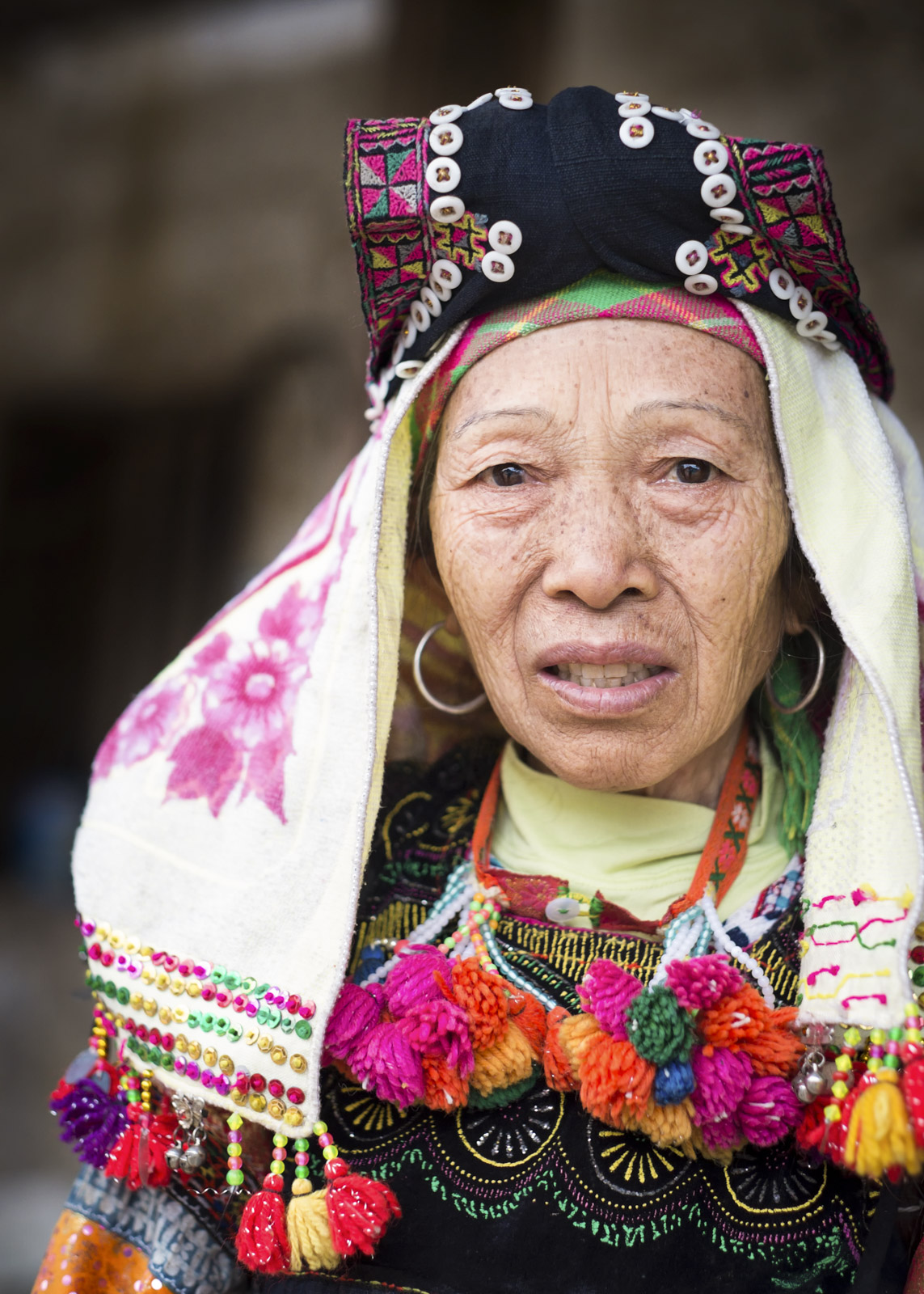 Cho’s a sensitive soul, and a good listener, and she seemed to be pouring out her troubles so I stayed out of it and didn’t play the tourist or try to join in. When I reviewed my images of her they seemed to have documented her clothing, but missed catching her soul, and I think this reflects how the interaction had been. 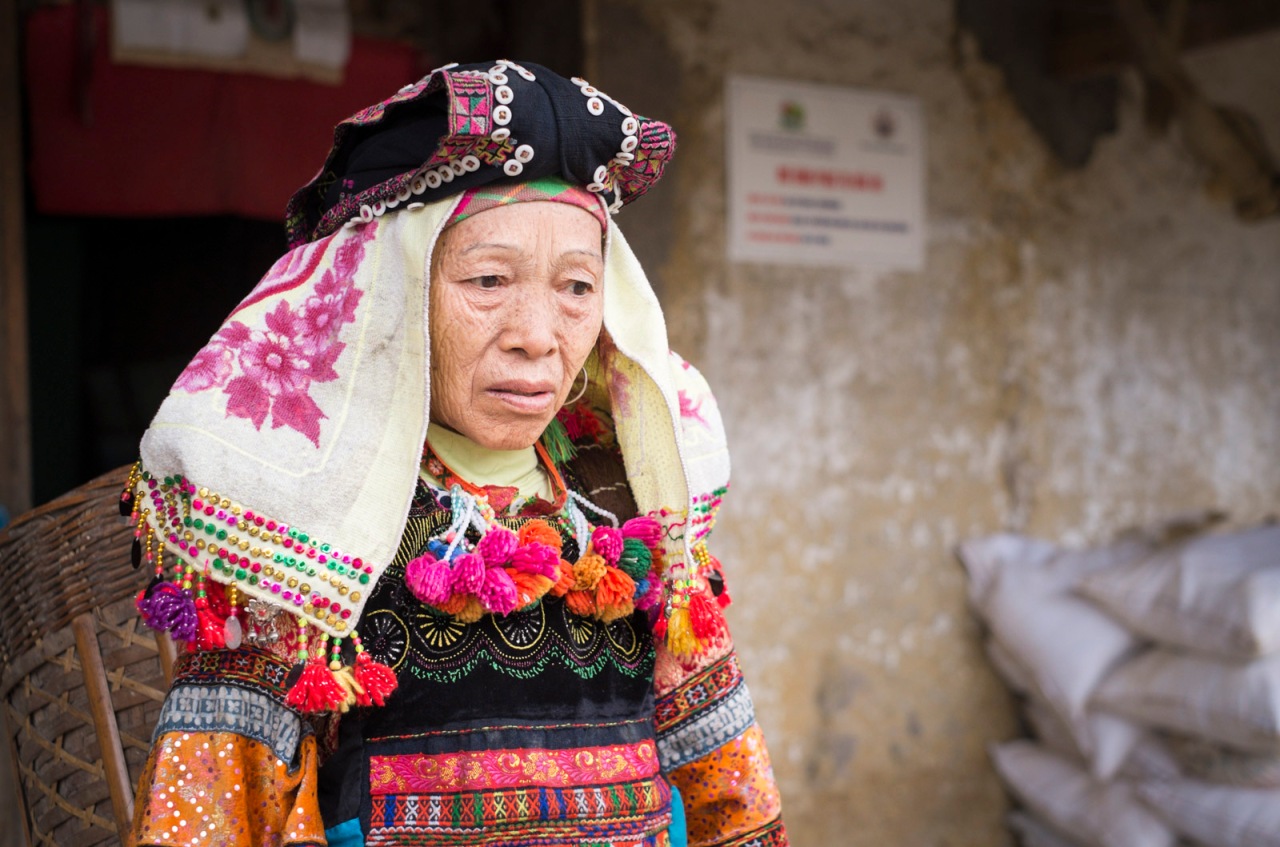 Although she was generously and willingly being photographed, she seemed rather preoccupied and unsettled. She was nonetheless very welcoming, and after talking to Cho, showed me round her house and explained some aspects of Lo Lo culture to me.

Each family has its own altar, and the wooden statues on the altars have faces drawn with black charcoal.Ancestors who have died, both near (“duy khe”) and distant (“po xi”) are worshipped and their spirits are believed to influence the lives of the living and are regularly appeased and given offerings.

She proudly showed me a beautiful book produced by her granddaughter documenting Lo Lo heritage, in which she featured. It was very professionally done and I would love to have been able to buy a copy, but she only had one and although she offered to sell it to me, I wouldn’t have dreamt of taking her only copy. 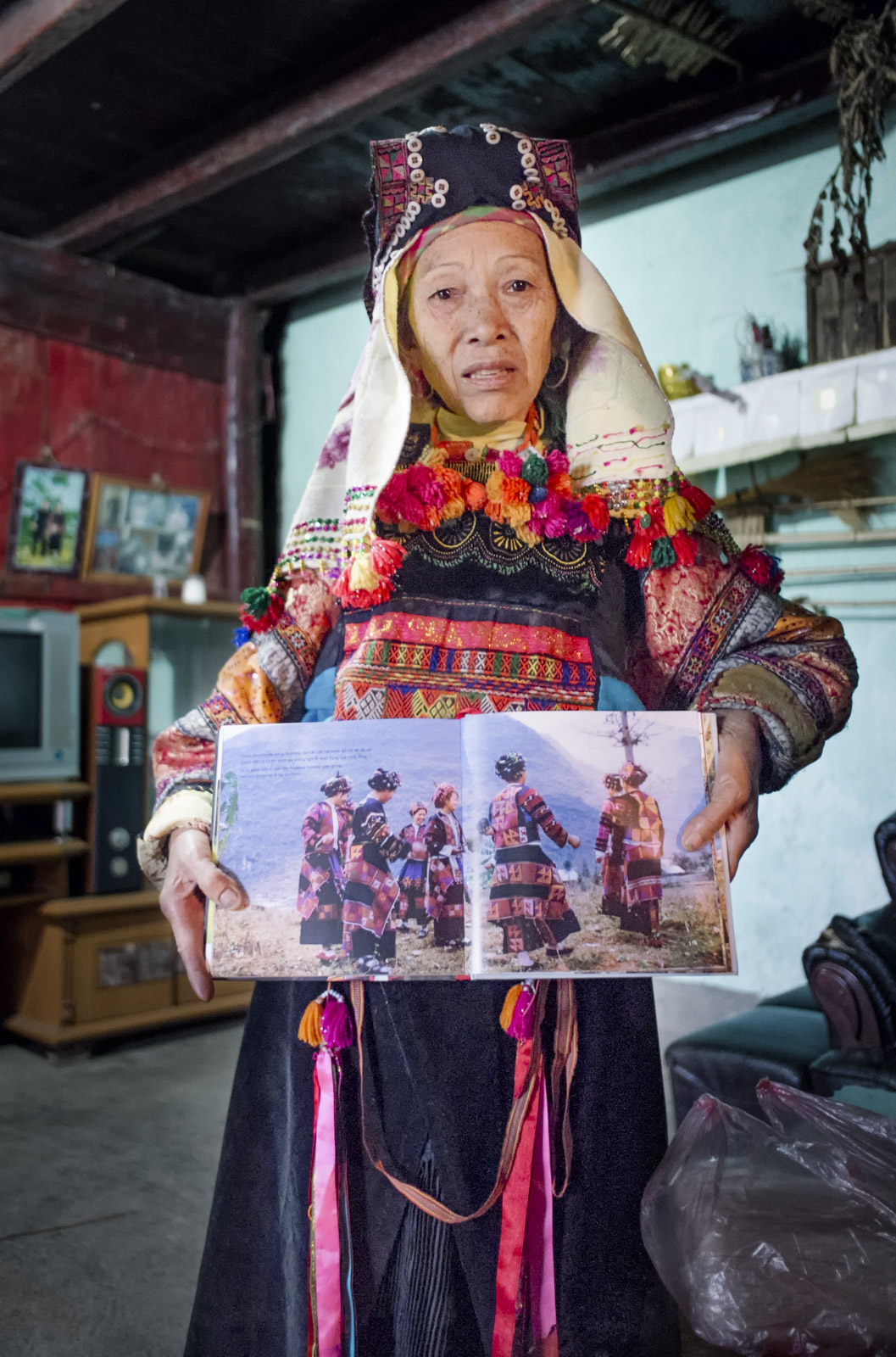 We looked at the book together and she talked me through it, animatedly showing me photos which illustrated Lo Lo heritage and their strong cultural identity, preserved through costume, dance, song and legends. 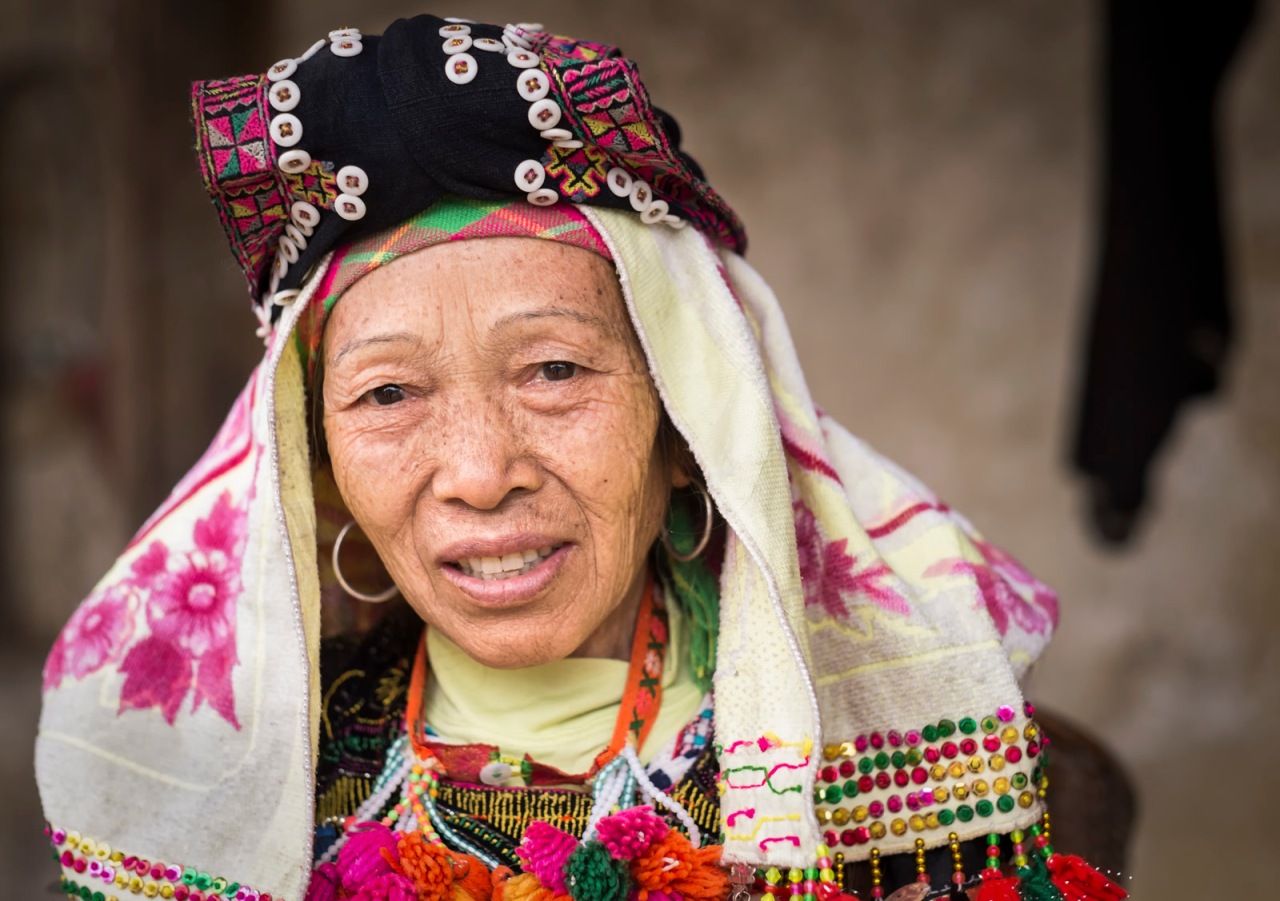 The bronze kettledrum plays a central role in Lo Lo culture, originating in an ancient legend about a catastrophic flood during which the Gods saved a girl and her younger brother by putting the girl in a big bronze drum and the boy in a smaller one. After the flood, they stayed on the mountain, procreated and became the ancestors of the Lo Lo people. The kettledrum is used in funerals, during which a male and female drum are beaten simultaneously and it is believed that only through the rhythmic sound of these drums can the deceased’s spirit finds its way back to the place of its ancestors. The drummer can only be a single man or one whose wife is not pregnant. The drum is very precious and sacred and inbetween use is hidden in the ground in a protected place and only dug out for special occasions.

Fascinating stories and culture. Whilst I’d love to be able to go back and experience and photograph one of the events she described and showed me in her book, maybe it’s as well that these people from a far away land are well tucked away in hard to find places, and largely keep their rituals to themselves. It felt right that the main interaction had been between her and Cho, a local. She had had a real conversation about whatever was troubling her, and was not there as an exhibit for a tourist. I’d also been pleased that it was her own offspring who had taken the trouble to create the photo book and document their own heritage before it is lost for ever to the inevitable march of time, and as we waved goodbye to her, and her grandchildren dressed in Western clothes, I came away hoping that in some small way, the photos I’d taken that day had helped more in the preservation of their precious culture than in contributing to its demise.